DC Universe is attempting to set itself apart by combining all of their media in one place. This includes movies, TV shows, and comics all available through their app. DC Universe has officially been released, and it isnâ€™t quite what I was expecting. There were two initial draws for me for DC Universe. First, their new show Titans looks really good. Second, I could read as many comics as I wanted without having to go buy the issues. Since Titans doesnâ€™t air until October 12th, I turned my attention first to comic books. While there is plenty of potential for DC Universe, my first look is disappointing.

Letâ€™s start with the comics. It looks like thereâ€™s tons of information on all of the characters including a helpful Encyclopedia. The encyclopedia gives origins for each character, powers and abilities, and storylines both in comics and other media. Where this encyclopedia drops the ball is that the information is there, but there are no affiliated links. For instance, I can read all about Batman; I can see his essential storylines and history, but if I wanted to read the Year One comic book run, I would have to search it on my own. Hopefully, DC Universe will realize the clunkiness in the encyclopedia and add links to these runs in their app. Also, with a character like Batman, he has been in tons of other media from TV to movies to video games. It may be difficult to scroll through all of these for a link to the one movie or TV show with Batman in it, but DC Universe may already have a plan in these circumstances.

So letâ€™s say you decided to pick a character and a comic book run and are ready to read on. For argumentâ€™s sake, letâ€™s say you decide to read Green Arrow: Year One. This comic book run has a total of six issues and all six issues are included with DC Universe. I have noticed so far that this seems to be an anomaly. There are plenty of gaps when it comes to the comic books available on DC Universe. While I understand why they may not want to include all of the current run of Rebirth, I expected to be able to read all of The New 52 or Futures End comic book runs for any character. Iâ€™m not entirely sure why there are so many gaps, but hopefully DC Universe can remedy this quickly. Even so, there are still plenty of comic books to read. So say you decide to read the Green Arrow: Year One run. You can download each issue (albeit, one at a time) and get to reading. 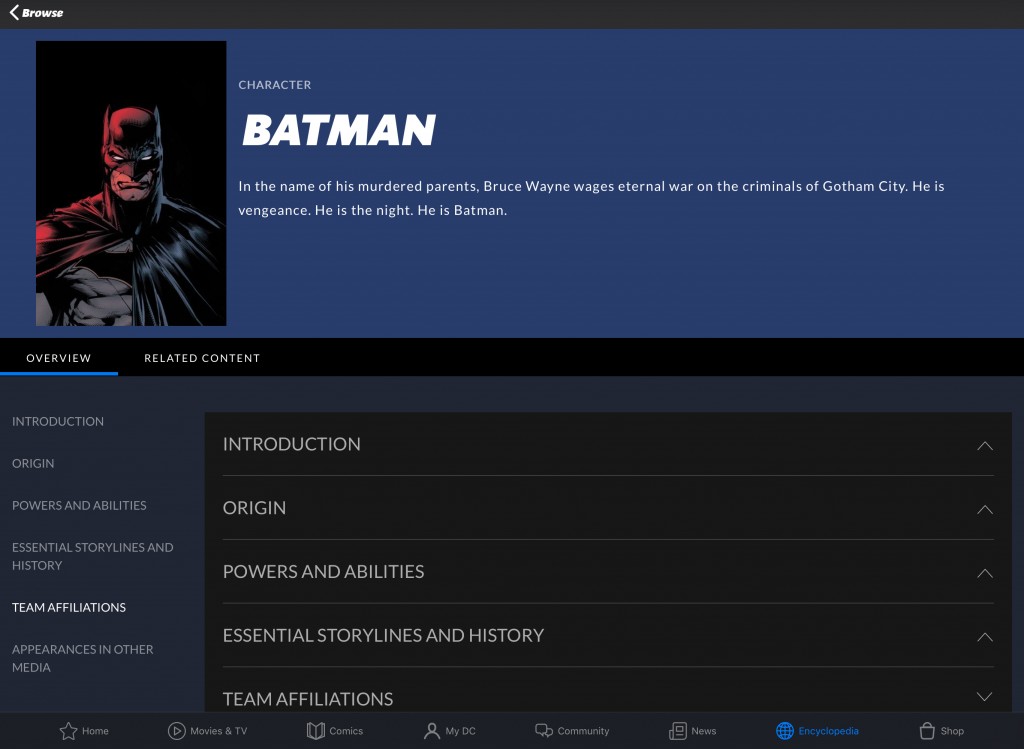 When youâ€™re ready to read your comic, there are multiple views from which to choose. You can choose to show the comic panel by panel or have the entire page showing at once. Tap the screen to advance the panel or page. Double tapping will change the view youâ€™re on. It will switch between a panel view or page view. When youâ€™re done, tap towards the bottom of the page, and youâ€™ll get the initial options. I didnâ€™t find this highly intuitive or user friendly, but the comic books look great on the screen. The other advantage is that once you log back in, your homepage will include a â€œDive Back Inâ€ section to help you easily pick up where you left off.

DC Universe also features plenty of other media in their movies and TV section. While there are plenty of titles to binge, some are noticeably absent. You can watch all of Christopher Reeveâ€™s Superman movies and almost all of the Batman movies, with the exception of The Dark Knight Rises. The TV shows that are included appear to not be missing any episodes, so binge at your own risk. The new CW shows arenâ€™t on DC Universe yet, most likely because they currently have a deal with Netflix. With the newer movies and TV shows wrapped up in existing distribution deals, only time will tell if these titles will come to DC Universe. 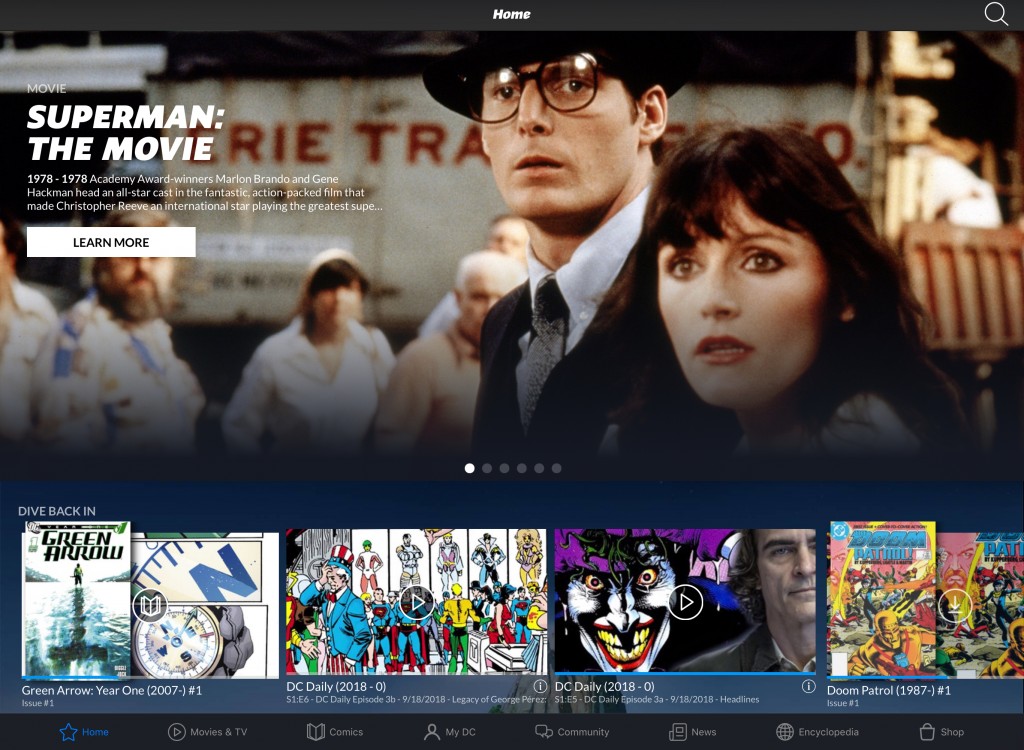 DC Universe is on its way to becoming a great platform for all of your DC media. However, in its current form, thereâ€™s much left to be desired. DC Universe has a lot to consider in the coming weeks and months if they want consumers to continue to pay for their platform. Another consideration to make is adding the capability for multiple profiles. If youâ€™re using the platform as a family, the only way to separate your media from another is to make a list. But your profile is still merged as one. DC Universe definitely has potential, and assuming that Titans makes a splash, it can continue to flourish. For now, weâ€™ll just have to fumble with some of the clunky UI and take advantage of all of the content that is there, in the hopes that more content will continue to flood the platform.