Co-op AND Single Player at Its Finest | Shift Happens Review

by Joey Lampe
in Uncategorized
0 0
0

Weâ€™ll get this out of the way early; Iâ€™m generally not a fan of puzzle platformers. They often just feel too tedious and random for me to be able to pull any fun out of the title. Sure, there are exceptions to my dislike of puzzle platformers, the notable title being Valveâ€™s Portal series, but by and large, I generally shy away from the genre. Having said that, Shift Happens is far and away the most fun I’ve had with a puzzle platformer in quite some time, and that feeling is only magnified in its strong and humorous local cooperative gameplay.

Shift Happens is a local cooperative platformer where the main characters, Bismo and Plom have a symbiotic relationship. They are forever connected after a freak lab accident, and anytime one shifts in size it forces the other to shift in the opposite direction. The shifting, as you’d imagine, is an integral piece of the puzzle. While the first handful of levels in the first world are pretty straight forward only having you to shift back and forth to fit through smaller crevices or to toss the other character about the level, the difficulty does ramp up quite substantially toward the latter levels in the 3rd and 4th worlds. But, it does so in a smooth, natural progression. There are also collectibles that open bonus levels for those looking for an even greater challenge.

That is one of Shift Happensâ€™ greatest strengths. It starts with a strong base including short tutorials (1-2 minutes in total) where it holds your hand just long enough to give you an idea as to what to do, without being too involved. 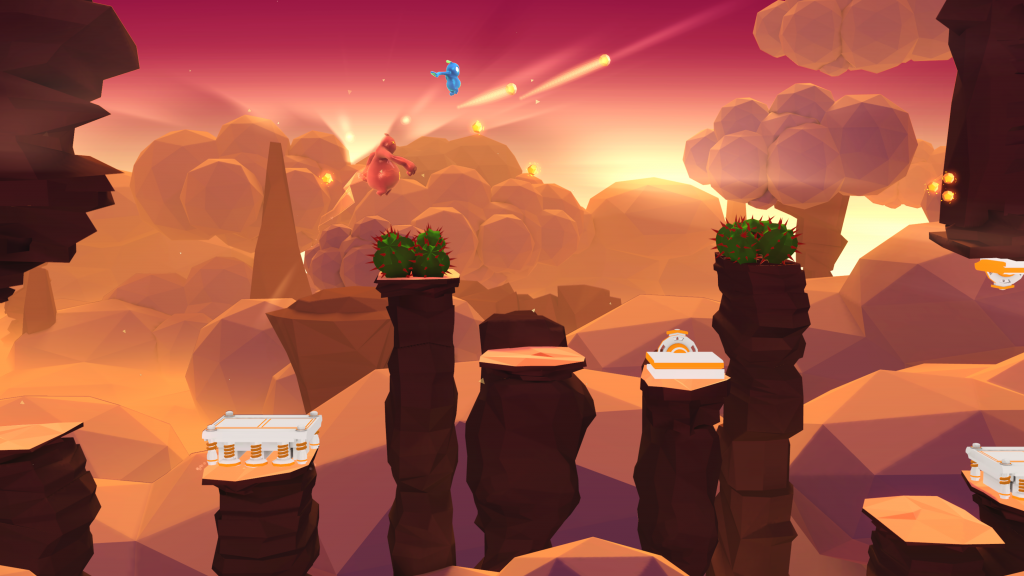 That is a crime in many games, the long tutorial. Thereâ€™s nothing more offputting than tutorial after tutorial after tutorial, but that is nowhere near present in Shift Happens. There were maybe 4 tutorials (test chambers) all about 15-20 seconds long where they showed a singular maneuver that your character could do that would be needed in the upcoming levels. The learning process really unfolds based upon knowledge of an everyday phenomenon, physics.

The intricacies of the puzzles grows as Bismo and Plom make it through the various â€œworlds.â€ The triumphant moment of you and your partner learning how to bounce one another while switching in the air to carry momentum is short-lived as the game keeps tossing more complicated puzzles your way. There were times in the latter levels where I was puzzled and did the most gamer thing ever, exclaimed that the level was impossible. Of course that wasnâ€™t the case, and after some serious thought, I came up with a solution that couldnâ€™t possibly work. It was just too out there to even be possible. Naturally, it was exactly as I had thought it up after dying a handful (at least 15) of times. A quick sampling of the solution is as follows: There are three vaults that would go up in succession with a lever so I had to place one character on the vault pad, a box on the one previous to that and then start the fun. The other character flicks the lever sending me in the air and I angle him toward the box which was just flung into the air and jump off that and land to my safety. What a rush! And, that was only a small section of one level.

Making the impossible puzzle, possible is why Shift Happens works so well. The way in which each level builds upon the previous one is what truly completes this… puzzle game. Itâ€™s exceedingly intuitive and provides for more fun and less frustration. 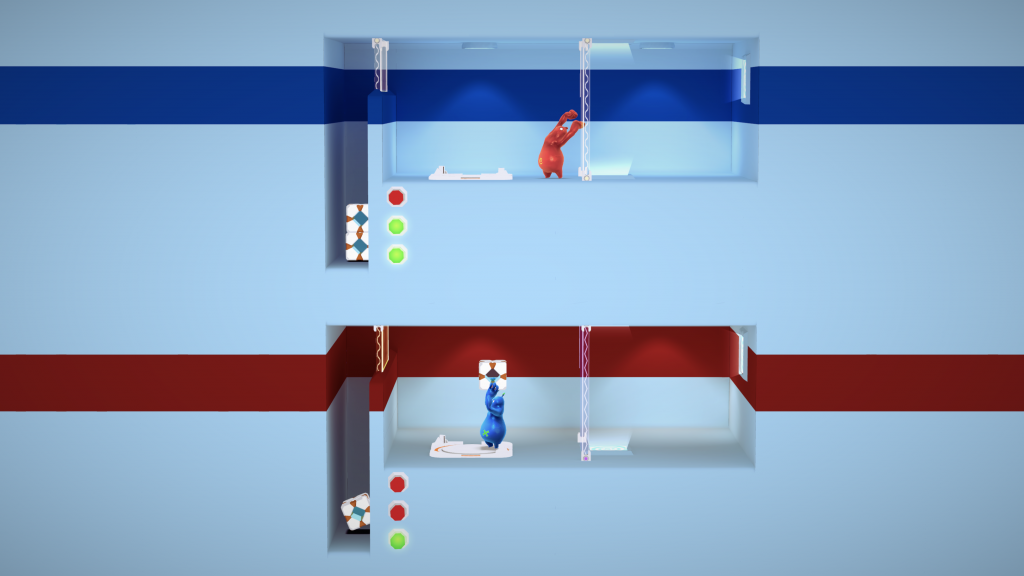 As has been mentioned in this review and various press materials, this is certainly meant to be a couch co-op game first, but itâ€™s clear that its single player counterpart was given the same love and care as the main feature. Surely you wonâ€™t get that real life couch co-op ribbing when you are the one that fails the puzzle, nor will you be able to â€œaccidentallyâ€ toss them into an electrified fence and then proceed to steal their collectibles before graciously resurrecting them. But aside from those live moments, the single player campaign is exceptionally fun and rewarding.

Since I am quite fond of my marriage, and my wife isnâ€™t all that experienced in puzzle platformers, I saved her frustration (and our future) and completed Shift Happens in solo. I was sort of dreading the fact of playing solo after having played up to world 3 (out of 5) cooperatively because I could just see where the complications of controlling both BismoÂ and PlomÂ would arise. I have some bad flashbacks of having to contort every finger to hit various buttons as if this wereÂ a David Cage game, but my fears were assuaged when I learned that the controls were simple and effective in traversing across the game.

I used a DS4 during my solo playthrough and mouse and keyboard in my cooperative playthrough, and personally, I felt more at home with the DS4. Thatâ€™s not to say that mouse and keyboard controls were cumbersome, they were perfectly adequate. But having grown up playing consoles, I tend to prefer playing side-scrolling titles with a controller. One interesting thing to note is that it does utilize the DS4â€™s light bar. When switching characters from BismoÂ to Plom, the color changes from red to blue respectively. Thereâ€™s hardly a use-case for the light bar, but this certainly did make me crack a smile when I saw the colors reflecting off my desk in my dark room. 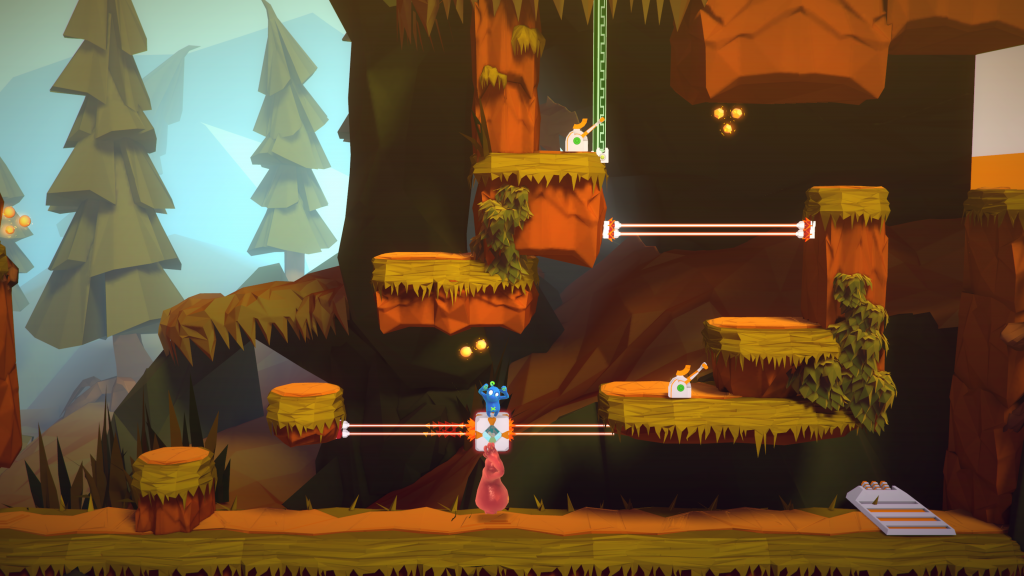 Shift Happens is a fantastic puzzle platformer. The difficulty and intricacies of the levels are laid out perfectly, which creates an enjoyable jaunt through the levels while still providing just enough challenge along the way. The care taken in the single player levels (which do vary slightly from the co-op portion) was much appreciated.

*A key was provided by the developers for review purposes