Of all that has been going on in the latest season of The Flash, thereâ€™s been one character that has been notably absent. That is none other than Harrison Wells, or an iteration of him from the multiverse, anyway. Adding Wells, or as he is known Harrison Sherloque Wells, into â€œThe Death of Vibe,â€ adds to the levity of what is starting to unravel as the main plotline of Season 5.

â€œThe Death of Vibeâ€ begins as Team Flash is trying to come up with a way to defeat Cicada. Fortunately, they have a trick up their sleeves. Since Nora is from the future, she would have all the needed info as to how they defeat such a menacing villain, right? Wrong. Apparently, Cicada is the one villain that Team Flash could never catch. Luckily, they breach in Harrison Wolfgang Wells to help them. He knows of a detective that will be perfect for the job. Enter Harrison Sherloque Wells. As youâ€™d assume, this version of Wells is an ace detective. Well, a supposed ace detective. 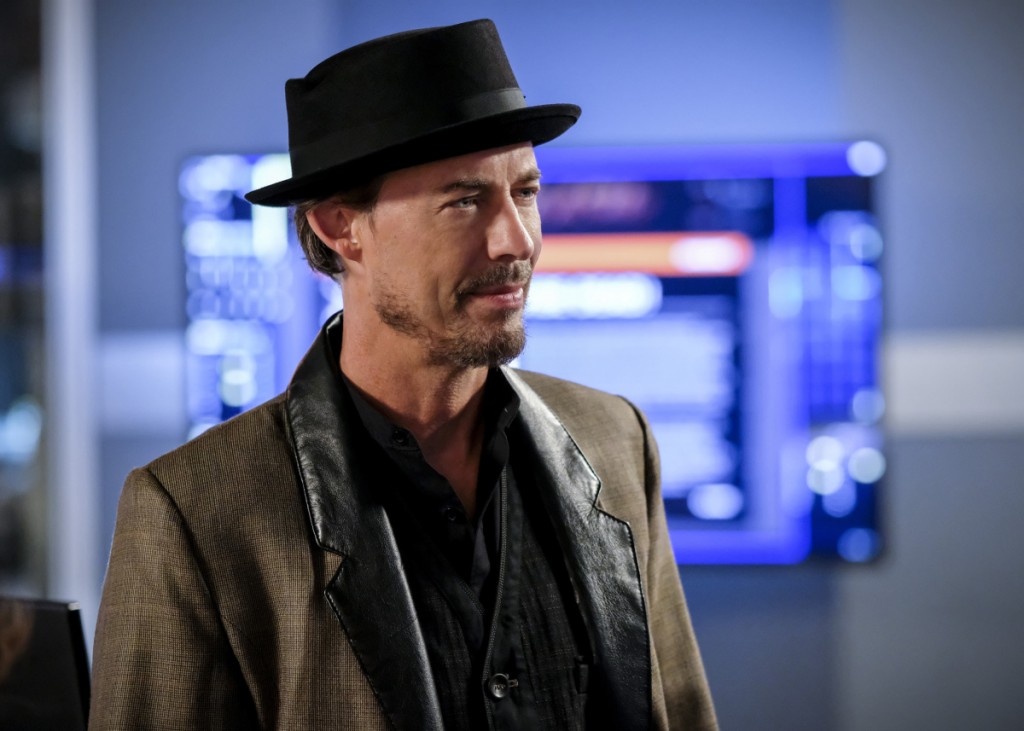 With Sherloque, there are now two detectives (of sorts), with him and Ralph. Sherloque dismisses Ralph, but Ralph has just an impactful episode as does the newly introduced Wells. Ralph and Caitlin sort of take a detour in this episode, and it is definitely for all the better. We get to not only see their relationship further evolve, but we get to find out much more about Caitlin. She was really close with her father, and their closeness is the spark that will lead to what will most certainly be an explosive reveal. In the episode, Caitlin and Ralph hilariously break in to her motherâ€™s office to find anything that could lead them in the direction of who forged her fatherâ€™s death certificate since they donâ€™t believe her mother. While searching, they find a seemingly innocuous momento from her childhood, a printout of the periodic table with made up elements she came up with during her childhood. The only other thing was a note from her father in which she placated to him being senile, since all of the elements were fake. Ding-ding. Of course, he used her elements as a cypher of sorts and it said to â€œcome find me.â€ It kind of sounds like a trap since the pieces fit so well together, but Iâ€™m sure we will find out soon.

Cicada has been the driving force for most of this season, and I actually enjoy that detail. In, â€œThe Death of Vibe,â€ Cicada is keying in on who he should target from Team Flash. He lands on Vibe, but by way of getting through Joe West first. This should have been all for not, since Sherloque Wells claims to be detective extraordinaire, but his ability to so quickly find who we thought was a bit suspect; turns out, there was a reason for that. Sherloque, while certainly being a detective, sort of has a thing for catching Cicada throughout the multiverse. There is only one problem, XS tinkering with the timeline means that what should be a bang for Sherloque, is more of a whimper.

While the team is finally discovering that all this is going on, not one of them questions why Joe isnâ€™t around for any of it. Of course, the real Cicada is holding Joe hostage until he calls for Cisco. Through his resolve, he refuses to call Cisco, but Cecille puts a wrench into these plans, albeit accidentally. She sneaks down the stairs and sees what is going on, but when she reads Joeâ€™s mind, he is saying not to emergency call Team Flash. That is, afterall exactly what Cicada wants. She is forced into the situation where it looks like he is going to kill Joe so she calls and they all come racing there. Cisco vibes in and then is immediately tackled by Cicada and they are breached into a forest.

The culmination of the team coming together and finally saved is entirely in XSâ€™ hands. Earlier, when they were going after the wrong Cicada, she was so adamant about capturing him that she defused a bomb, but Sherloque then told her it was a diversion and there were three others. If it werenâ€™t for Barryâ€™s thinking, she would be in a bad way. He gave her a great talk about how she can do anything, but she has to think before going full on commitment. She does this and devises a plan to get them all out, which works. What we later find out is that Cicada appears to be doing this for his daughter who looks terminally ill. Could this be another case of a situation where someoneâ€™s circumstances drew them to doing nefarious things to save the ones they love? But, that doesnâ€™t answer the question as to where they got the Flash symbol that saps abilities. Possibly someone telling him how he could save his daughter for something in return?

The final question from the episode is who was watching Caitlin Snow in her lab piecing together the periodic table puzzle? Presumably it was her dad, but how, and most importantly, why?