Iâ€™ve been up and down as it comes to villains in The Flash. There are times where they absolutely nail the character, but others where they fall quite flat. Sadly, this episode’s â€œvillainâ€
hardly does anything for me, while somehow being one of the most impactful villains to the various characters on The Flash.

The episode’s name is a bit of a misnomer, if you think about it in terms of the monster being the â€œvillain.â€ The titleâ€™s name surely has to do with the monsters that are within all of the characters in the show. Whether it is Caitlin Snowâ€™s inner Killer Frost coming to the surface or Julianâ€™s continuous fight over his self prescribed powerlessness, many of these characters have their own monsters. The actual villain that they must stop is nothing more than a high school kid getting back at those who bullied him by controlling a huge holographic monster. While this villain does allow for further characterization from the characters, it was obvious how much of a backdrop the villain was.

Julian has always been the stuck-up lab tech as juxtaposing Barryâ€™s bubbly personality, but now we finally understand why that is so. After The Flash saves the kid from being shot by Julian, that exact moment is when he finally breaks down and explains why he has been so confrontational. He was from a powerful family but wanted to make it on his own. His real struggle, though, comes from wanting to help everyone and not being able to. His being powerless makes him feel as such, and thatâ€™s what makes him always come off as bitter. Luckily Barry and Julian bury the hatchet after this ordeal. 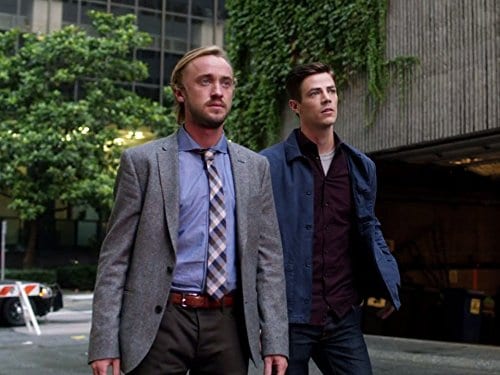 I am glad they didnâ€™t drag his brutishness out any longer, while also capitalizing on how long it did last. The villain was extremely lackluster, but it was the perfect vehicle to deliver this story to us.

Where Julianâ€™s monster was metaphorical, Caitlin Snow has been dealing with that from two fronts. Firstly, the transition into Killer Frost is starting to take its grasp, and I canâ€™t wait to see how this new development alters the team at STAR Labs chemistry. Surely they will be understanding of what is happening, but will she be able to contain her anger once she does make the final transition to Killer Frost. We get to finally meet her mom, and she is exactly as youâ€™d expect, neck deep in her work with little time for Caitlin. Her mom even snobbishly remarks about STAR Labs throughout the episode. But, she does eventually come around once she realizes how crucial of a situation her daughter is in. At one point, her motherâ€™sÂ lab assistant wonâ€™t let Caitlin leave because he wants to break the code of her transformation and get out from under her motherâ€™s spotlight. So, it was exactly the same situation Caitlin was in herself.

Similar to Julian, we learn the whole reason Caitlin even started at STAR Labs; she wanted to get out of her motherâ€™s shadow and be known for her work and not for her name. Itâ€™s interesting how the two parallel one another so perfectly. Â With Caitlin finally making some headway with her mother, will her transformation bring them closer? Or, will we see her relationships with her mother and the STAR Labs crew fracture.

Caitlinâ€™s whole transformation is one of the most interesting aspects of the entire series. Her having met Killer Frost makes it that much more unique because she knows the end result if she canâ€™t suppress Killer Frost from coming through.

The aspect that was largely teased before the episode somehow turned out to be the least interesting. The whole mystique behind HR Wells should have been wholly entertaining, but as is done far too often, the major interesting aspects are spoiled before the reveal. Sure, there was a twist that this Wells could be evil, something that strangely wasnâ€™t really talked about prior to him coming over, but the ah-ha moment just didnâ€™t have the pizazz it could have. Having said that, Tom Cavanagh still reigns as one of my favorite characters, and seeing this quirky Wells is still fun. The aspect that he doesn’t actually know much of anything and that he just fosters ideas is hilarious since it proves that he is quite different than the Wells from Earth-2.