Shadow of The Tomb Raider Review

The story takes off with Lara continuingÂ her investigation into the cult group of Trinity. The cult is trying to take control of the world using ancient magic. While the story isn’t going to win any prizes, it’s only saved later by the introduction of the city of Paititi and Lara’s overall growth and actions throughout. For those who are expecting a grandiose adventure, you’re in luck; Shadow of The Tomb Raider does it big! Coming from a recent playthrough of Rise of the Tomb Raider(ROTTR), I can confirm that you will see tombs on the scale of ROTTR’s finale on a regular basis.

The tombs you explore in Shadow of The Tomb Raider are such a callback to classic Tomb Raider in the size and feel. Throughout the game I was mesmerized with the effort put into the design of all the new tombs. They felt big enough, but not to a point where they became pointless. Again, some are optional but I definitely recommend doing them because they feel fresh and a bit nostalgic any way you want to slice it. Added into Lara’s repertoire is the new rappelling mechanic which is pretty clever and doesnâ€™t seem out of place.

Lara returns to having all her tools that help her navigate these dangerous tombs. From the onset you can choose your difficulty setting and pretty much create the type of experience you want. SOTTR has sliders for difficulty options that let you change things such as including hints on where to climb, important objects and even toggling the ability for Lara not to point out hints. This is a feature I wish more games had. The sliders can truly be a game changing experience since you can customize things that can be seen and AI to a certain level without really feeling like you played something the wrong way. 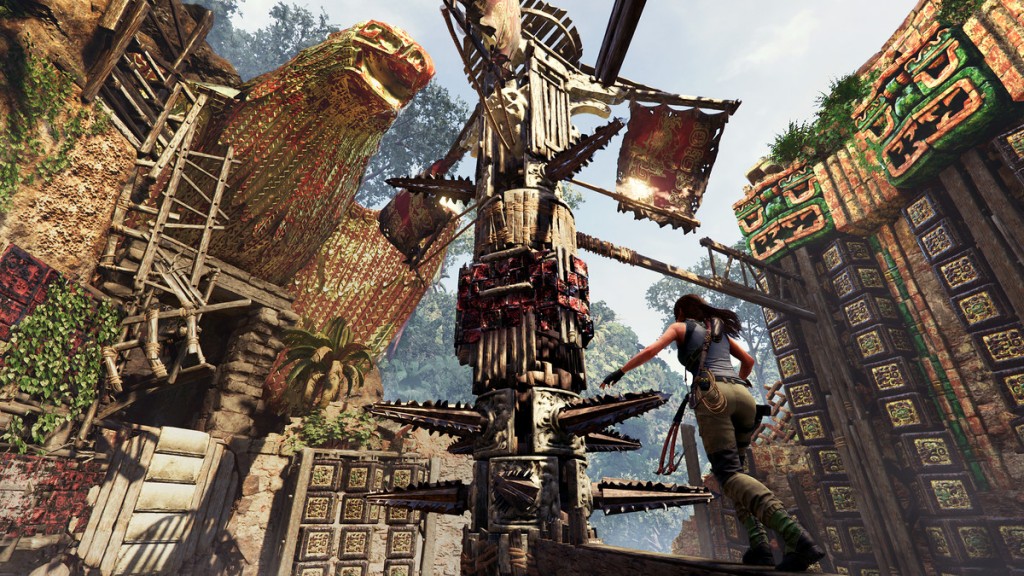 The City of Paititi

I’m thoroughly impressed with how the city of Paititi was handled. Being shown off multiple times as this open hub with Â lots of mini activities to do and sights to see, it really did it for me. During your visit to the city, you’re given native garb which you must wear during your time at the city, that alone really pulled me in. I say this because it shows that Lara is turning into that Tomb Raider we know and love. Little things like that sprinkled throughout the game are very touching as a Tomb Raider fan, and it shows me they are taking care with the character as they push her progressionÂ forward.

Paititi being the general hub of the game is beautiful and reminiscent of classic Tomb Raider interpretations. Waterfalls and Vistas are present in Paititi, but seeing the natives there and interacting with them is pretty cool to see. In this aspect, more could be done with the natives but I thought it was the right amount without overstaying its welcome.

In Paititi, Lara can shop and go on quests. There are not many quests given, but the quality more than makes up for the lack of quantity. As someone who doesn’t dabble much in open-world games, Shadow of the Tomb Raider does it right in making the environments feel properly expansive. If you feel it’s too much, you can always fast travel after you collect campsites. Those who aren’t familiar with campsites, these are places scattered throughout the world of Shadow of The Tomb Raider in which your game saves and you have the ability to upgrade skills and weapons. The campsite idea is a carry over form the previous games in the new trilogy. 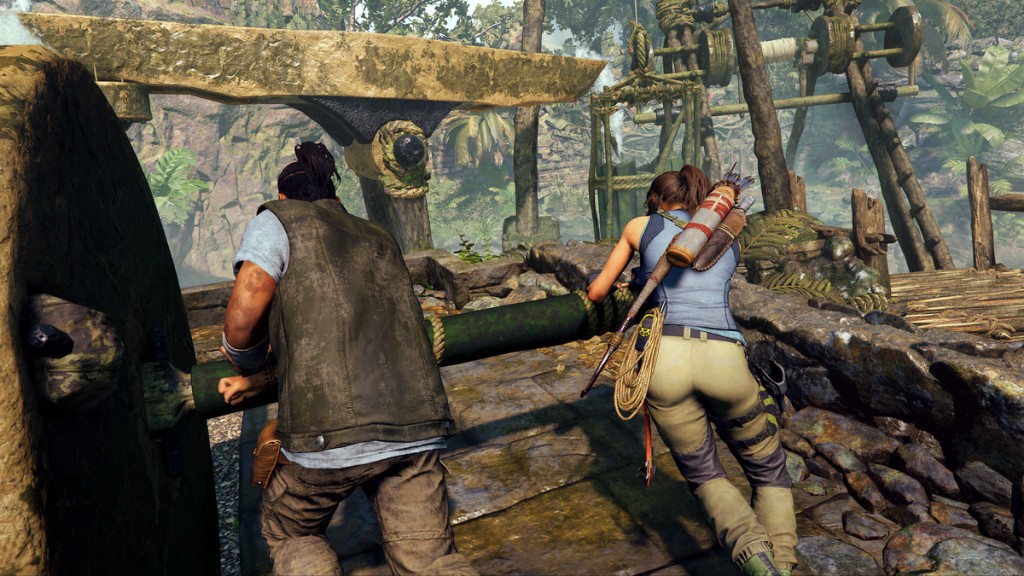 Whole Bag of Skills and Things

Shadow of The Tomb Raider gives you the option to play how you want to play. I found that the way itâ€™s done in Shadow is the definitive way it should have been done in previous titles. Yes, you still have to unlock skills that are adjacent to the skills, but now every action is split up by category and some skills require you to complete tombs to use them.

Many of the skills are geared toward your playstyle. On my run I put almost all my skill points into the seeker skills because i wanted to be more gear-efficient as i thought I had pretty good aim. So, I never ran out of ammo and was upgrading at all times. Other skills were more passive like never losing your grip on jumps and other things including holding your breath longer when swimming. You read that right; Shadow of the Tomb Raider reintroduces swimming with freedom unlike its predecessor where the swimming was very straightforward.

In Shadow of the Tomb Raider you can now swim with freedom again, which is very reminiscent of the classic Tomb Raider. IÂ didnâ€™t have any trouble with the swimming, and navigating underwater felt great. Crystal Dynamics actually made the underwater segments fun, and I enjoyed the freedom I had searching around just finding random things underwater.

What I didnâ€™t like about some portions of these parts is that they throw piranhas into the mix. They are barely there, but they create getting to places quite a challenge if you don’t keep an aye out for them. To avoid them, you hide in patches of seaweed. Besides the piranhas, fans of the series will notice Lara now has a diving option. The diving option isn’t like theÂ swan dive, but it’s something and looks epic jumping off waterfalls.

Lifestyle of The Tomb Raider

On this globe trotting adventure to stop Trinity, Lara is now prepared for almost every type of obstacle thrown her way. This Tomb Raider is more evolved and more ruthless while still using your bow as your main weapon. It’s still the most satisfying bow in gaming. With the use of your bow, you can easily take out enemies without being seen. Collecting things in the environment connects itself quite well with the gameplay presented, because if you’re someone who likes to loot everything and explore you will never run out of ammo or useful power-ups.

Shadow of the Tomb Raider introduces a new type of item in the form of a plant that can give you heightened senses. I really didnâ€™t care too much for this because I just didnâ€™t see any benefit for it. Heightened senses highlighted resources and enemies, but again, survival instincts does almost the exact same thing and is more useful. Crafting and equipping has never been easier then this. Crafting arrows comes down to holding a single button.

The biggest surprise is using your healing packs. Changed from holding down one button to pressing two which is perfect since Rise of The Tomb Raider made that system kind of annoying and caused multiple deaths just because you were holding the button during shootouts. Small changes like these are awesome because it seemed like they were paying attention to how players reacted towards certain situations. 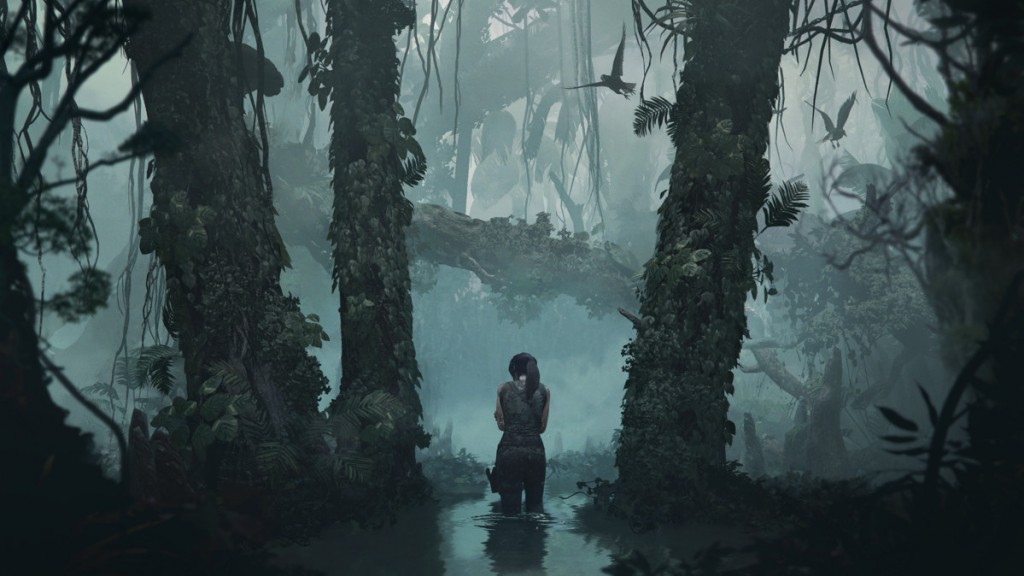 Become One with the Jungle

Now, the biggest change by far in Shadow of the Tomb Raider is the gameplay. It may be one of the best Stealth titles in recent memory. YouÂ read that correctly. I can easily say that Shadow of Tomb RaiderÂ is up there with the greats in the stealth department. I say this with the game creating scenarios in combat where you can pretty much go unseen at all times, and itâ€™s very easy to grasp the systems in play.

New to the series is giving yourself camouflage with mud and that adds extra cover as you can now stealthy hide behind bushy walls for more intensive methods of not getting captured. Â What I found best about this system is just how perfectly it flows with Tomb Raider in general.Â Itâ€™s about time , since I felt that Rise of the Tomb Raider had moments where you faced countless of waves of enemies. with fewÂ proper ways to deal with them besides just head-on. The tools you gain Shadow of The Tomb Raider make it so you donâ€™t have to stress about those waves. But, if you’re into shooting stuff up like crazy, go for it as the game works perfectly fine for that style.

So I found the amount of freedom the system gives you just enough variety. You do get some more bouts with wilderness in Shadow of the Tomb Raider unlike the past games. It really does a good job balancing out intense moments because you can change the tides so easily, if you know your area. Â Survival Instincts is your friend for taking down enemies, but in most cases, later on you have to get to them before they get to you. ThisÂ creates a flow of gameplay I havenâ€™t seen for quite awhile in the stealth aspect.

Â Shadow of The Tomb RaiderÂ was reviewed on Playstation 4 and is also available on Xbox One, and PC. A review code was provided byÂ Square Enix.