A pink blob, a purple blob, an anthropomorphised tree with an excessively large nose. The pink blob inhales quantities of matter, foreign bodies, hostile figures like a demonicÂ vacuum cleaner and then changes shape, costume and abilities based on the absorbed matter in an unknown and unexplained type of digestionÂ resulting in synthesis and bodily fusion.

Reduced to its core elements, the Kirby franchise is an oddity at best, lunatic raving at worst. Then why has such a willfully, wonderfully absurd premise birthed yet another title in an ongoing series of successful insanity?

Political motivation, a certain intensity of vision unique to the creators and chiefly editors of a video game are apparent in what are canonically extolled titles. Bioshock is praised for its apolitical sensibilities. The Last of Us is praised for its parable of renascence in the human spirit, of a phoenix-like quality that is nominally unique to human intelligence and which limits Man in his grief, which makes humanity unable to cry for a protracted period of time over even an ocean of spilt milk, and for its net melioristic outlook, its mastery of the ‘cosy catastrophe’.

What then, is the message of Kirby, and how does its message press on the nerve ends of artistic interpretation?

The answer is affrontingly simple: It has no message.

But even the apolitical position is a position – in this instance, so too is the absurd.

While it can be argued that the nature of a symbol is such that it transcends the intent and even the understanding of the author, (we know this from the miriad interpretations left to us of Kafka’s work; The Trial especially; a recent mode of critique which is itself post-Freudian and post-‘Death of the Author’), it is almost beyond reason to suggest a pattern to the chaos of Kirby’s Dream Land. In lucid, comprehensible fiction and ‘fact’ in its most unfiltered, sensory state, the mind projects into what is concrete its own spiritual tragedy. But even where Neitzche has proclaimed all language as lie, and where Freud has made the parodistic reconciliation of language even more richly fragile by suggesting unconscious motivation, the message of Kirby is garbled nonsense.

I am a person who endures even the most sterile narrative with optimistic romance; with a willful misunderstanding of genius in mediocrity. In short, I very rarely come across a game, or more broadly, a characterization, a narrative where continuity is non-existent and where symbolism is pure personal inference. Those who would still say of Kirby ‘There is more in heaven and earth than can be dreamt of in Horatio’s philosophy’ are forgetting that no-one ever provedÂ Horatio was a great philosopher. Are forgetting that the rational – at some point – must account for human creation.

Reading a message into Kirby is trying vainly to give poetic solidity to pure wind.

After replaying nearly every iconoclastic Kirby title in the last month, starting at Dream Land, skipping over the assorted pinball spin-offs, tilt-n-tumbles and Air Rides in the interest of expediency, philistinism has flatly refused to pay the tribute it owes to taste. I have been unable to come up with even a vague profundity. At first play through, you could almost say that Kirby is a reversal of the parable of Man v Nature where Nature is privileged, as in Hayao Miyazaki’s Laputa or Princess Mononoke, and is instead presenting humanity’s pinkish, blobby march over nature, full tilt against the natural world. But of course, that only accounts for Whispy Woods, not Dedede, not the later incarnations of cosmos-related bosses, not Meta-Knight in more recent releases, not the castle worlds. The enemies, as much as the level design and transformations, a tank – a raccoon type creature – a knight, have a definition so fluid as to forfeit all potential for symbolism, compounding leitmotif, or continuity. The transformations are derived from industrial constructs, from the animal word, from anywhere and seemingly nowhere. King Dedede, a conspicuously bird-like creature, is a nonsense contradiction with the impersonal, patrician character he assumes. Far from being wise, or observant, or anything else characteristic or stereotypical of the owl as a symbol, King Dedede is bellicose, rash and idiotic.

It makes no sense.

What then, can be the effect of such an experience? If rationality exists in Kirby, what is the rubric of creation in Nintendo’s most non-deterministic, non-binary heroesÂ ?

Hermeticism as in Kirby, since Mallarme and his indecipherable poetic fixation on ‘le blanc’, has been most widely classified as a reaction, haughty and desolate, to markers of literary collapse, to the collapse of coherence and the ‘classical’ mode of story-telling. The indescribable, the undefinable, the unfinished, that which offers everything and confirms nothing, is of this thought. A kind of modernism in story-telling, like the rise of abstract art, like Gustav Klimt and the secessionists, Kirby too, bears the marks of hermeticism. The classical narrative is defined by ‘naturalness’. Either the character feels his fate to be ‘natural’ or ‘unnatural’, or, less frequently, the reader/viewer is inclined to sympathize with the ‘natural’ or ‘unnatural’ fate to which the protagonist is subjected. In Kirby, there is no ‘naturalness’, no sympathy for the condition of the main character, and an ending which is inconclusive and anticlimactic. There is no definite ‘villain’ insofar as a demonized, inhuman force as is the case of Gannondorf in The Legend of Zelda – just a disgruntled penguin, forcibly disinterred from his illegitimate throne through the ceiling of his own castle, whereafter he expresses shock at the events of the game and waddles off, unperturbed. 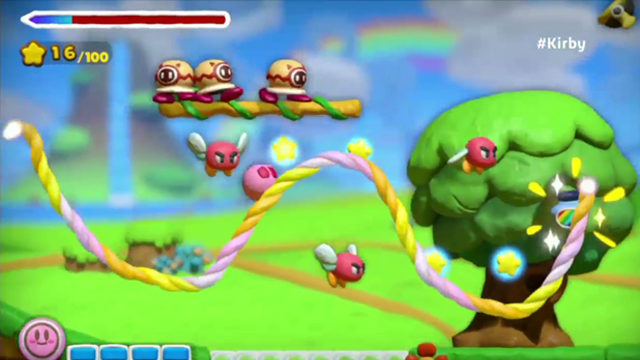 The latest in the chronology, Kirby and the Rainbow Curse, is, straining believability, even more nonsensical. A praeternaturally suspended ball of goo is propelled around lurid, platforming worlds by rainbow lines appearing at will fromÂ the delicate tracing of an omniscient player’s hand.

But Kirby remains a fan favorite, continues to spawn game after game, and has attracted a cult following of its own – despite having no discernibleÂ allegory, no powerful symbolism and no definite sympathies for good or evil. Kirby is fun to play, there is no doubt. Its maddening difficulty curve and unique gameplay diversity keep it well above the morass of uninitiated gaming mimicry.

The longevityÂ of Kirby is a message in itself. That a world-view and world-building which barely passes the test of sanity is sufficient to produce great art. That when force of belief is behind the vivid imagination of game creators, no political motive, no esoteric imperative is necessary to create a gaming classic.

AÂ barely sane premise, a well thought out control scheme, and an intensity of vision to give it color will do.