Not only are we getting to learn more about Gar aka Beast Boy, but we are getting a sneak peek at the Doom Patrol. Gar leads Rachel back to his home filled with some eccentric characters, while Kory and Dick work together to find Rachel.

Itâ€™s hard to believe that we are only four episodes into Titans. â€œDoom Patrolâ€ gave us a closer look into Gar and how he came to become Beast Boy. In the Congo two years ago, Gar was lying on a bed during some sort of outbreak. It looks like all of the doctors are leaving the patients, presumably because they are giving up. But, one doctor believes that he has what it takes to save Gar.

Later, we find out that this man is the Chief; he has been saving those who many believe are beyond saving, or doomed if you will. After arriving at Garâ€™s home, Rachel first gets a glimpse of Cliff, aka Robotman. Cliff used to be a racecar driver, but a crash destroyed his body. Chief was able to save his mind and essentially turned him into a robot. It seems that Cliff has had a hard time adjusting to his new life. During dinner, he asks Rachel to describe the food they are consuming because he misses eating food. He also misses dancing, but Rachel doesnâ€™t see why he canâ€™t dance anyway. After all, heâ€™s got to be great at the robot. 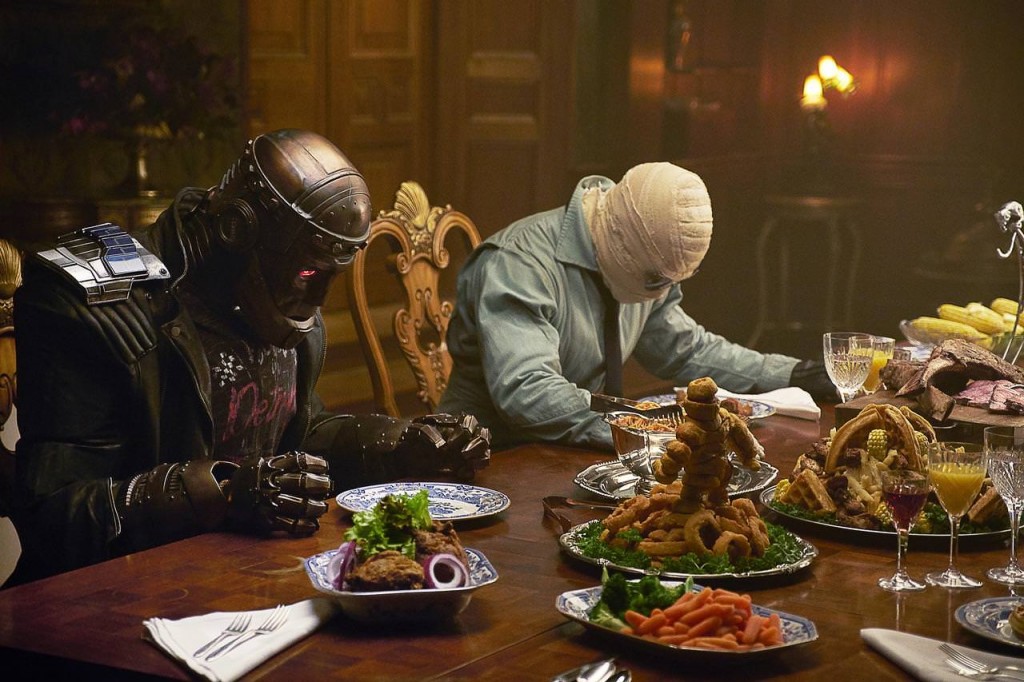 Gar invites Rita down to dinner, but it seems that she doesnâ€™t socialize all that much. Rita Farr, aka Elasti-Girl, used to be an actress and a star, but she was kept for decades in an institution. When we first see Rita, all we see is a mass lying in bed. She â€œpullsâ€ herself together to come to dinner to meet their new guest, Rachel. She piles tons of food on top of her plate, explaining that her condition requires a particularly high caloric intake. During the meal, Ritaâ€™s face starts to fall apart, and sheâ€™s clearly embarrassed in front of Rachel. But, Rachel isnâ€™t afraid; she only asks if Rita is all right and places a hand on hers.

The final member of the Doom Patrol is Larry aka Negative Man. Heâ€™s the chef in the house, yet Iâ€™m not sure if he eats either. We didnâ€™t get much of Larryâ€™s backstory other than he was a pilot for the US Air Force. The good part is that despite not being able to see Larryâ€™s face, he was one of the most dynamic of the new characters.

Rachel is enjoying life with the Doom Patrol, until a new patient comes in. The Chief is trying to save a woman who is freezing and making the entire temperature of the room plummet. Chief and company are having trouble stabilizing her until Rachel steps in. She holds the girlâ€™s hand and is able to calm the girl down enough to stabilize her condition. Chief is astonished at Rachelâ€™s gifts and is ready to study her.

Rachel allows Chief to put her powers to the test, but when she sees his medical tools, she backs down. Despite being afraid of her growing powers, Rachel doesnâ€™t want to be a pincushion for Chief. Gar tries to help Rachel get out of the restraints, but Chief stops him. Obviously this was a bad move; Chief hurt Rachelâ€™s friend. Rachel lets loose, throwing Chief around the room. Thankfully, Kory and Dick have caught up to Rachel at this point. Dick is able to bring Rachel back to reality and calm her down. He promises to never leave her again. He was wrong for telling her that she was in this alone.