Poor Team Scorpion; they just canâ€™t catch a break. They decide to take a private case that should be a piece of cake. They are hired by a Los Angeles Museum to examine a decaying artifact. Naturally, thieves break into the museum and wreak havoc on our team. Meanwhile, the team works on getting Walterâ€™s citizenship, so he and Happy can get a divorce.

The museum needs to lock in Team Scorpion for the night, since they have to turn off their security cameras while the team uses their equipment. Unfortunately, it doesnâ€™t take them long to figure out that they arenâ€™t alone in the museum. Thieves show up and immediately tie up Happy and Walter. Thankfully, Toby and Paige are outside of the museum, so they can still get help. At first, it seems like the thieves are after gems from the museum even though there are far pricier artifacts. In the gem room, there just so happens to be an asteroid containing Tantalum, which can be used to make a WMD.

Naturally, Sly knows a way to communicate with Paige and Toby even though their communications are all jammed. Sly figures out how to get a message to them through a falcon from the museum. Slyâ€™s knowledge of birds continues to save Team Scorpion. The thieves almost get away with the Tantalum, but the Scorpion team wouldnâ€™t dare let that happen. They save the day as always, and the government covers the damages in the museum granted Team Scorpion get some insurance.

Because Toby forgot something at the garage, he and Paige got to have some quality time together. Paige is trying to make Toby see that he canâ€™t be a micromanager of Happyâ€™s pregnancy. She just needs him to be there and dote on her when she wants something. Ironically, Toby has some pretty funny irrational fears. First, heâ€™s worried that Happy is too impatient and cold to love their baby and be nurturing. Of course, Iâ€™m sure she will be different with her own child.

Toby also has the worry that their child will be normal and not be a genius like them. He says it as if being normal isnâ€™t good enough, but heâ€™s just scared that he wonâ€™t know how to father a normal child. Paige knows that if she can take care of Ralph and Team Scorpion, then he and Happy will be just fine. Paige does a great job calming Toby down and makes sure that he is reminded that no one is perfect.

Happy, Walter, and Toby are really in a predicament now that we know the truth of Happy and Walterâ€™s sham wedding. Cabe suggests that he can use his influence to rush Walterâ€™s citizenship. Walter doesnâ€™t want to do that because it invites a lot of scrutiny. Toby accuses Walter of being selfish and not thinking of his and Happyâ€™s happiness. While they are hiding out in the museum, Walter and Happy share a really nice moment. Walter explains that he really does care about her and Toby. He also thanks Happy for being such a great friend and helping him make Scorpion what it is. He realizes that Happy has been the best fake wife he could have ever had. 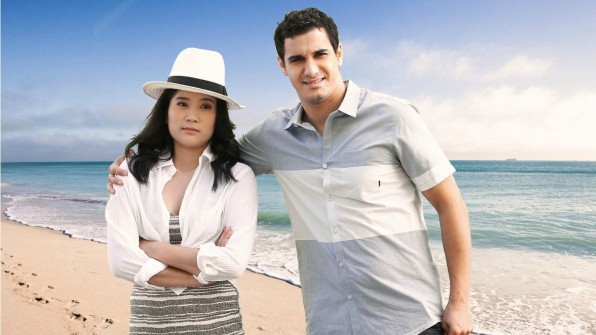 Walter even says that he will go back to Ireland if need be. Happy tells him to stop talking crazy, and they will find a way to keep him where he belongs. Walter has found a home with Team Scorpion, and they wonâ€™t let him give that up. Walter decides that he needs to speed up the citizenship process. Unfortunately, his every move will be scrutinized, but heâ€™s willing to do whatever it takes to make things right for his friends.

Now that Walter has decided to speed up his citizenship process, his marriage to Happy will need to be airtight. When the lady arrives from INS, Walter and Happy try to fake it, but boy are they terrible. They are so stiff and barely look like they like one another. Toby realizes that he must take it upon himself to make sure that they can get through this scrutiny. Walter and Happy need to live together for a little while, so they can know everything about one another. Of course, Toby needs to live with them as well, like one big happy family.

Nintendo having a Switch Presentation on January 12th, 2017