“Birds of Prey (and the Fantabulous Emancipation of one Harley Quinn)” is officially in theaters, and I think you should grab your gal pals and get to this movie. While the DCEU has had some missteps in previous movies, I think they’re finally starting to find their groove.

Suicide Squad may not have had the best reception, but one thing most could agree on was the portrayal of Harley Quinn. Margot Robbie nailed the part, bringing the Joker’s girlfriend to life. Robbie continues her stellar portrayal in “Birds of Prey”. There were a few things that really stood out to me. Anytime the Joker is on the big screen, everyone wants to hear the laugh. If his laugh isn’t right, then he’s not believable. For Harley Quinn, Margot Robbie had the best laugh. Harley’s laugh is more of a giggle, and it was perfect.

Along with her laugh, Harley always finds a way to add some humor into ridiculous situations. Her attention span isn’t very long, so her mind is always wandering; oftentimes to food. She mentions ordering a pizza before a big fight, and she’s in love with a breakfast sandwich. I enjoyed that “Birds of Prey” was a pretty dark movie, but it was also hilarious.

One of my favorite tidbits that was included with Harley Quinn was her use of non-lethal weapons. Most people know that Harley is famous for using a baseball bat or mallet. She definitely wields a baseball bat beautifully and is near deadly with it; however, she also uses a gun. Of course, it’s Harley Quinn, so this isn’t your standard gun. No, her gun shot out bean bags and confetti bombs. While it’s clear the confetti packed a punch, the humor and lack of deadly attack made the fight scenes that much more fun. Plus, the confetti added an explosion of color that lit up a violent scene. Harley Quinn and the Joker are known for these types of antics when they fight, so it was great to see that represented on the big screen.

And speaking of fight scenes, hats off to everyone involved in them for “Birds of Prey.” While there was always a lot going on, I never felt lost in the scene. The camera work always took your eyes where they needed to be. Harley’s skills with the baseball bat were amazing.

Also, us ladies can rejoice. Both the writer and director of “Birds of Prey” are females, Christina Hodson and Cathy Yan, respectively. They added instances that poked fun at all of the ridiculous things that go into fight scenes in most Hollywood films. Harley changes her shoes at one point, which leads to the other women wondering when she had time for that. Plus, Harley made sure to share a hair tie with Canary who desperately needed her hair out of her face. Simple nods like this are sure to make you chuckle while watching “Birds of Prey.” 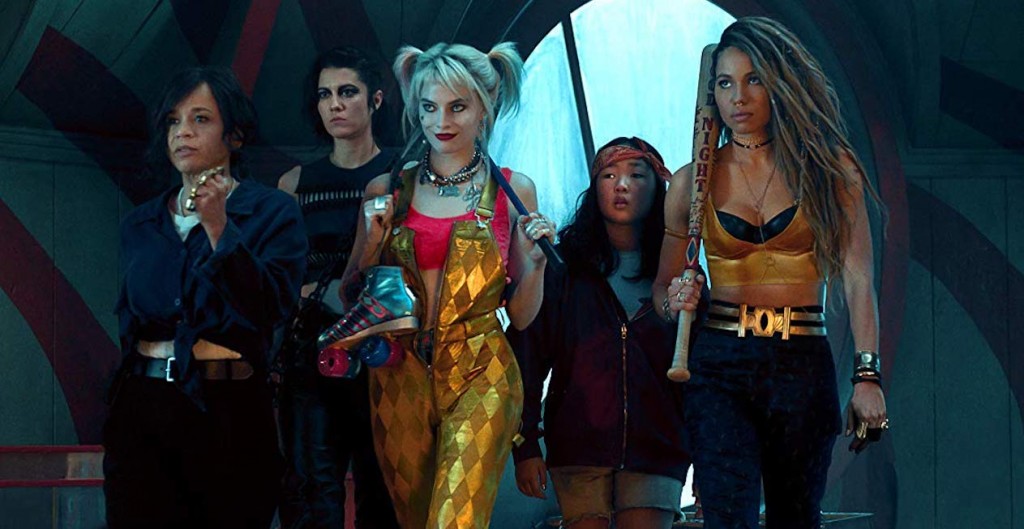 If I were to pick one struggle with this film, it’s the question of why they chose to call the movie “Birds of Prey.” Since the film was released, they have already begun changing the title to “Harley Quinn: Birds of Prey.” From the beginning, it’s clear that Harley Quinn is the star of the film; she even narrates it. I understand that they want to introduce badass characters like Renee Montoya, Black Canary, and Huntress, but the focus is clearly on Harley Quinn. I’m curious why they didn’t decide to make this change earlier.

As for the other characters, we didn’t get a ton of time with each of them so far. I did enjoy what we saw of Huntress, Canary, and Renee Montoya, but I expected to get more from them considering the movie is about the Birds of Prey. I really enjoyed Black Canary and hope we get to see more from her. Black Canary has been featured on the small screen with the CW TV show, Arrow, but I liked that this version of Canary is a bit more dark. In “Birds of Prey” Canary’s mom worked with the police as a hero, using her powers. Canary is more jaded and doesn’t really want to be put in the crosshairs. Jurnee Smollett-Bell brought both snark and sass to Black Canary, and I hope we get to see her and her powers more in the future.