by Austin Small
in Nintendo, Review
0 0
0

28 years ago, Icarus and Daedalus, an enduring Greek parable of ‘how not to make glue’ was wrested from its classical heritage by Nintendo’s Frankenstein caress.

Icarus endured the transmutation from antiquarian allegory in dilapidatedÂ old books to low-brow media mainstream when it hit the Family Computer Disk System in 1986 in flying form. It spawned a vogue of mythology gaming, of literature based gaming motifs and thematic appropriations; some with high fidelity to their original material and others wildly, comically, disingenuously abstracted from the original myths.

Much has been said for and about the title since its lackluster reception upon initial release – about its cult classic status, about its steep difficulty curve and its graphical mediocrity. The history is fairly basic, I will leave the didactic recounts and doctrinaire reviews to other writers so inclined. I’m concerned chiefly here with what Pit represents, what stock he comes from, the context of his myth and its classical allusions.

One of the more interesting things about the original Kid Icarus – from the first enthusiastic jab of the start button – Â is the trajectory, the lineaments of the gameplay.

Namely, it goes up.

The doctrine of the Fall, a somber felony, a dark, millenarian anxiety that Man has suffered a tumble from grace, a pollution of once perfect innocence. That lost innocence, most pronounced in the original greek myth, has taken many theological forms, the Christian Fall of Man, portrayed by Milton in Paradise Lost, as well as many secular manifestations, the Marxist near tearful inveighing of a lost human paradise smeared by the graffiti, the profane tyranny of capitalism, of Levi-Straussian anthropology or Freudian psychoanalysis, with its predictions of Man returning to a state of indulgent, beastly animalism.

Throughout much of mythology and great modes of totality, there is a countercurrent to this transcendental fear – meliorism. The belief that man can and will recover paradise lost. The belief that Man is nobler than the complications, the injustices, the longueurs of his brief time on Earth. That despite his civilization being wrought with the fragile instruments of sensory input, perceiving a narrow range of colours from violet to red, hearing a specific frequency of sound, hope will endure the fragility, even as an ephemeralÂ atmosphere, and eventually precipitate the second coming of Man’s ‘natural’ equilibrium.

While nearly all games have in them some phantom reminiscence of triumph over adversity, a pitting (pun intended) of good against evil; the parable of Kid Icarus is an especially explicitÂ nod to theology andÂ steeped in classical literature.

In Kid Icarus, the notion hasÂ a visually organized, palpable bearing. Ascendant from the underworld, trouncing the Minotaur, Pit languishes briefly in the purgatory of the lateral ‘surface world’ and finally ascends again through the ‘sky world’ to defeat Medusa and rescueÂ Palutena. Immediately, the image that emerges is of Dante’s Inferno. Like Dante’s Comedy, Kid Icarus is structured around a movement fromÂ dissaray, chaos, confusion and melancholy to happiness and fulfillment. The inverse of Tragedy, in which an initial state of cohesion is dissolved in an air of fatality or disaster. Pit journeys, as does Dante’s protagonist, to the light, to meaning, to God in a sense, to his final form as an angel.

The important parallel here for me is that of the everyman breaking down the illusory boundaries of hierarchy. Of the average incurring visitation ofÂ the divine. Nintendo seems to be painting Pit as an errant, rebelliousÂ hero – Â much as Dante’s hero, the humble peasant, has a jocular face-to-face with the big guy upstairs. Even the way that Pit moves across the screen and emerges the opposite side a level higher would indicate a spiral structure flattened to accommodate the 2D display; as it is in Inferno when the protagonist descends and then ascends in the opposite direction. Curiously enough, the rotation of the spiral is also the same from Dante to Kid Icarus.

The metaphor deepens. Omniscience, the synoptic viewpoint of the narrator in Inferno is also consonant with how the player interacts Â – once removed – with the action taking place on screen in Kid Icarus.

Then, of course, we can consider Kid Icarus to be the literal afterlife of its founding myth.

Is it not strange to anyone else that we begin in the Underworld? That in climbing the Dante-esque ladder to Palutena, we first pass by conspicuously ghoulish grim reapers, physically overcoming these spectres, these overt, perennial symbols of death in Western culture? Is it not possible that we are playing through a fantastication of Icarus’s afterlife? Certainly the theme of rebirth is evident in the prefix ‘Kid’, and salvation by a divine entity (Palutena in the form of the bow) is a trope commonly associated with death and rebirth.

Also note the lack of Daedalus (Icarus’s father who made the ill-fated wings and also the Minotaur’s labyrinth) in Kid Icarus’s plot. The paternal is replaced by the maternal. The man who built the devil’s labyrinth, the home of aberration and deviancy and darkness and damp is replaced by the giver of life, the mother of hope, the profoundly religious promise of reconciliation and salvation. The slope from sky to sea in the Icarus myth becomes the ladder from Hell to Paradiso in Kid Icarus and its antecedent, Inferno. The shocking end of animation, the dissolution of body into sea becomes a lava gush from some other, more real order of existence. Even Medusa, a mistress of temptation, is an allusion to the licentiousness condemned by religious doctrines which preach celibacy.

If we read Mario as a symbol of Leninist revolution, if we read Donkey Kong as a symbol of re-claiming the greed, the avaricious prodigality of industrial capitalism, it’s not such a daunting leap from Kid Icarus to its conspicuous classical inferences.

After a 21 year lull following the release of his spam-friendly spat in Smash Bros., Pit, in Kid Icarus: Uprising continued the thinly veiled classical literature allegory.

Where to next for the winged wonder? 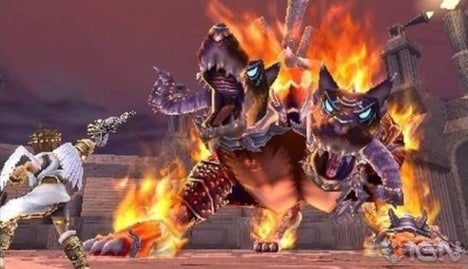 With the 3DS gaining some longevity from the New Nintendo 3DS release, we may be expecting a new entry into the franchise soon. Maybe Nintendo will look to revive some of the retro appeal and abandon the fly and shoot mechanic?

All that can be assured is that with Pit, the journey will always be up.

If not writing about or playing the latest offerings of over-dressed simians and over-enthusiastic plumbers, can be found still trying to conquer the Ghost Ship in Super Metroid.