Lode Runner is a series as old as I am. Originally appearing in 1983 by Broderbund on systems such as the Apple II, Commodore 64, and Atari 8-bit consoles. It’s sequels and re-imaginings have been seen on countless systems, like the Famicom, MSX, GameBoy, Sega Saturn, and tons more. And now Tozai games brings this classic to the Switch and moderns OSes. But does this re-imagining hold up? 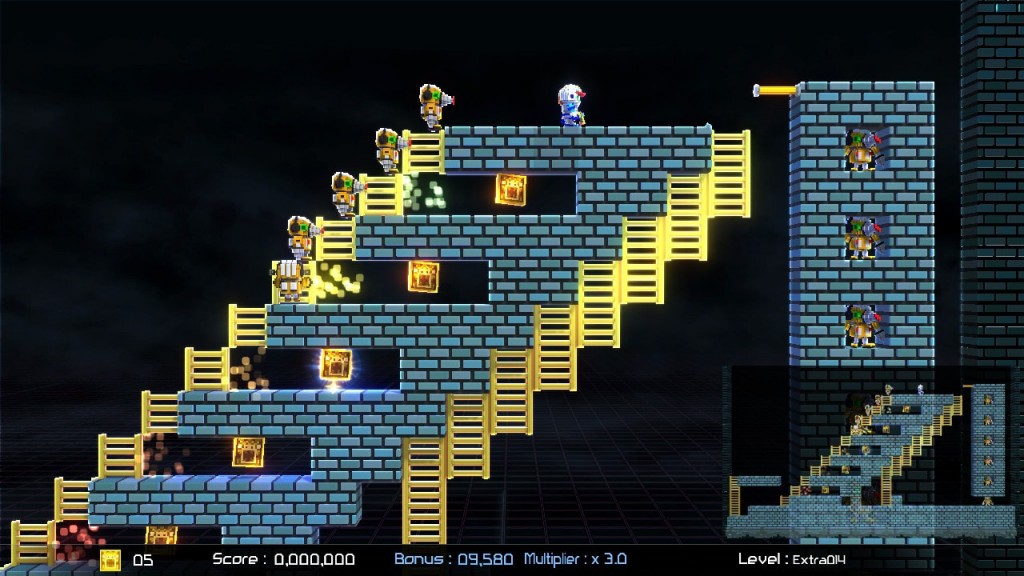 The gameplay is pretty simple. Your character moves left and right, as well as up and down on ladders. Although you cannot jump, you can destroy blocks to the left and right of you using the left and right face buttons. This enables the Runner to go to lower levels. Enemies are defeated by destroying blocks and having them fall into the pits. There are ladders and pipes that the Runner can also use to navigate levels. It’s a fairly simple concept, that makes it easy to pick up and play.

There are also two camera settings. Camera 1 shows the whole play field as it is. Making it easy to see objectives, enemies, and the obstacles. Camera 2, faces the right side of the play field. Which in turn, makes your screen half as useful. As half of it is showing the nothingness of in front of the camera. It shows just how shallow all of the elements are. There is a small version of the play field on the lower right hand side of the screen, but I found myself using that exclusively anyway. Camera 2 just feels like a last minute addition that doesn’t add anything to the experience. 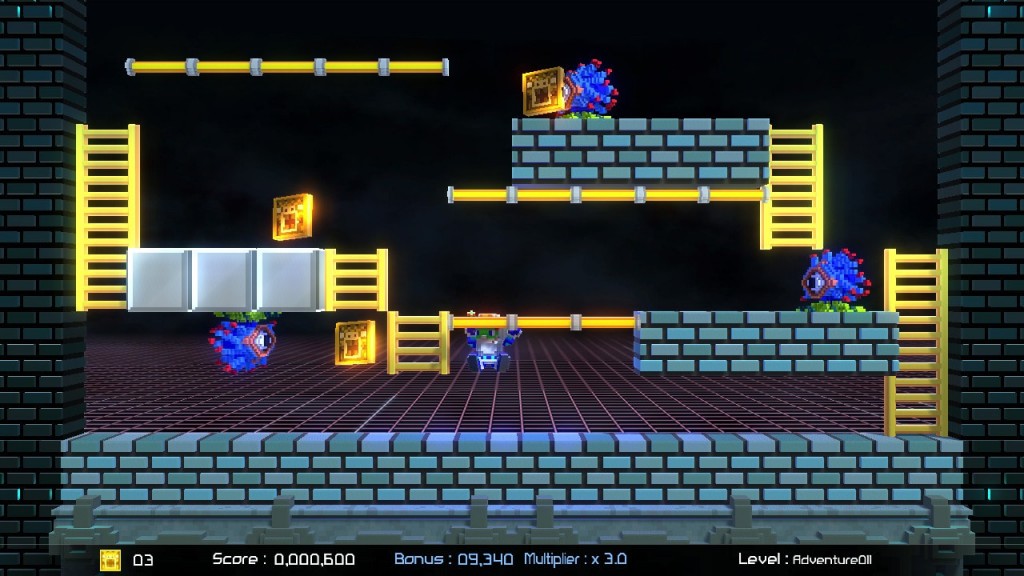 There are quite a few modes available, unfortunately not from the get-go. After playing around 15 levels in the Adventure mode, the rest of the modes are unlocked. From there, Extra mode is unlocked. Extra mode offers more challenge with an additional 20 levels on top of the 50 in Adventure. These extra levels have new enemies. Next is Puzzle mode, which offers 50 more levels with a focus on puzzle solving without enemies.

Then there’s Classic mode which has 150, as the name implies, classic levels from the original games. Done in a semi-retro style. It’s basically a 2.5D re-imagining of the original PC version. And for those who require more Lode Runner, there are the World Levels which are fan created levels that people can upload. And finally, there’s the Craft option. 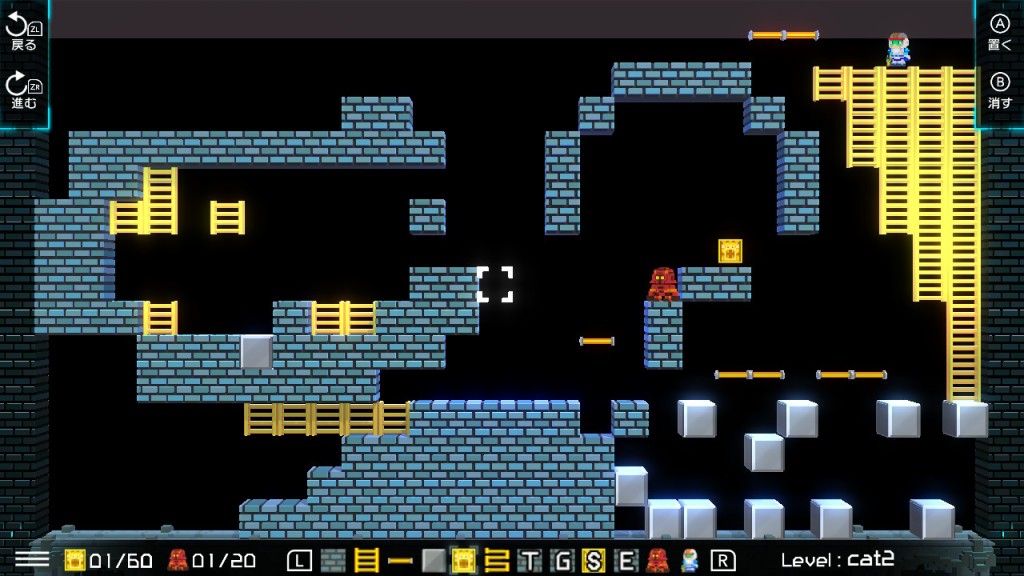 Although “Craft” isn’t the word I would use to describe it; it’s a create a character/level/item mode. Firstly, there’s the level creation. Simple enough, you select the element you want and then place it on the field. It’s a 2D field, so it is pretty intuitive. Only a few requirements, a runner, an object and the escape ladder. There is a hard limit to enemies and gold, but other than that, it’s up to the user to create their level. Then there’s the Create a Character mode, which is a little more extensive. Here users use a 3D version of the character and can design them from there. There is a transparent basic body from the start to help guide the process. So, for instance, it’ll show where the arms, head, and legs should be. And there’s the Create an Item mode, is setup similarly to the create a character mode.

Once any thing is created, users can upload them to the servers and let people play them on their system. It’s a great idea to allow users to get more bang for their buck. Although what remains to be seen is how extensive the user-generated content will be, or even if it’ll be worth playing. 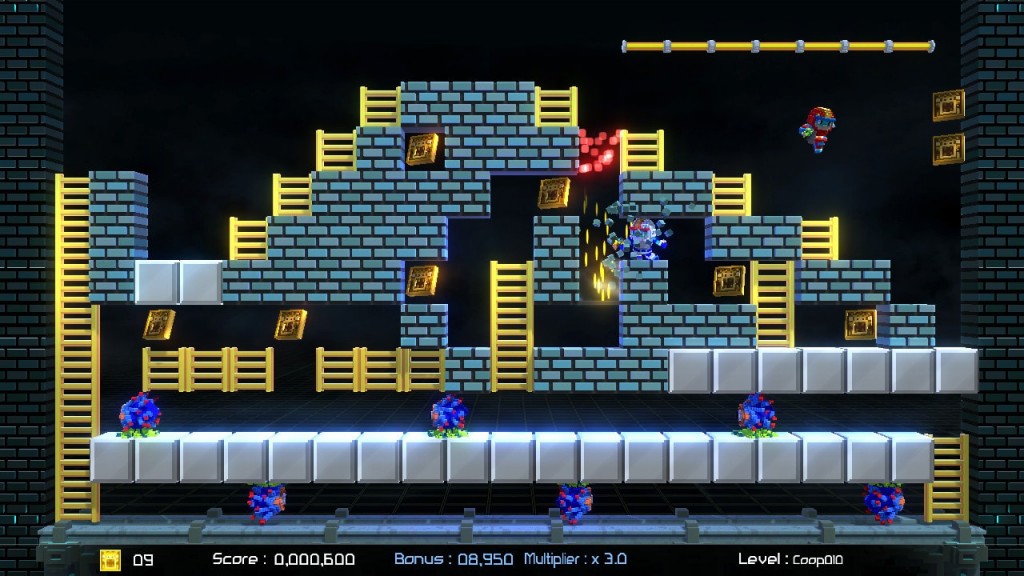 Overall, Lode Runner Legacy is a good distraction. I found myself enjoying the puzzles well enough for a while. I also got a kick playing some levels as a floating Famicom. Aesthetically, there really isn’t much to go on. The blue neon blocks get kinda boring after a while. And the gameplay is too finicky. Every item is placed on a grid, but the Runner’s movement isn’t grid-based. So sometimes I’ll be trying to destroy a block to capture an enemy, but I won’t be far enough away from the block I’m trying to destroy to make it disappear. So I get hit and die. It will probably satisfy fans of the other games, but unfortunately doesn’t satiate me.

*Review Copy was provided by Tozai Games, LodeÂ Runner Legacy is Also Available on Playstation 4, Xbox One, and PC.