No Result
View All Result
Home

There is just something that is so inviting about turning menial real-life tasks, such as cooking or, in this case moving out, into a zany coop game. It’s been and continues to be done across video games of all sorts, and the latest in the line of wacky coop games is Moving Out.

Having the opportunity, or misfortune, of having moved plenty of times in my life, I can’t even begin to count the number of times I’ve dinged up wall corners, had drawers fly out or attempt to eye-ball whether we could fit this awkwardly shaped dresser around a corner. Moving out is seldom fun, but it’s safe to say that the game, Moving Out, is exceedingly so.

Moving Out has you and up to three other players maneuvering various shapes and sizes of furniture into a moving truck with the clock ticking giving you a gold, silver or bronze medal upon completion. While certain items can be lugged solo (like a small tv or a chair), or physically thrown out the window and onto a truck, the larger items force you to work together, or as was often in our case, seemingly against one another, albeit accidentally. Large items like obnoxiously large couches that need to be pressed through impressively small door openings provide an interesting challenge that requires more than just chucking things out a window. The hilarity of laughing through a mic trying to coordinate, of all things, an L-shaped couch through a door frame was hilarious.

But, the first couple houses were only the start of our work as a moving out crew. While things start simply, albeit always with some kind of being, be it an animal or a ghost attempting to thwart our attempts, which was nothing a slap couldn’t fix, Moving Out did a fantastic job of increasing the difficulty of the areas through not only the items being moved, but the location in which they are being moved. A simple one story house allows you and your fellow mover a dip as to how the controls work, and it isn’t low before multiple story houses, guava (like lava but…guava), switches, levers, fans and a less than benevolent rat stand in your way. The buildup, something that could have been disastrous if too hard, but also just as so if being too easy, hit that perfect spot of being just challenging enough, while not being rage inducing. No one level had us stuck for long periods of time, but there were certainly levels where we had to take a step back, and literally talk it through as if we were coming up with some big master plan. That usually didn’t work, not on the first try anyway!

Controlling the quirky characters is easy enough, with the joystick to move, a button to jump, another to hold and ultimately throw an item. The only qualm with the action motion of the characters was when we were trying to pick up items we stacked outside (since it is a huge time saver to just chuck stuff outside and then toss it in the truck later) and attempted to both grab a heavy item. Without fail, one of us would accidentally grab a different item multiple times. Not a huge bummer, but it did get annoying enough that we would make sure we were a bit more purposeful with our furniture tossing. Also, there were times where I didn’t exactly know how much impact each person was actually having, mainly when carrying an object together. Usually it felt as challenging as you’d expect as you are trying to yell out different ways to maneuver around, but other times it either felt like you were the only one controlling it, or, on a few occasions, that somehow each person was going against the other. It didn’t happen all the time, but it did give me pause when it did. 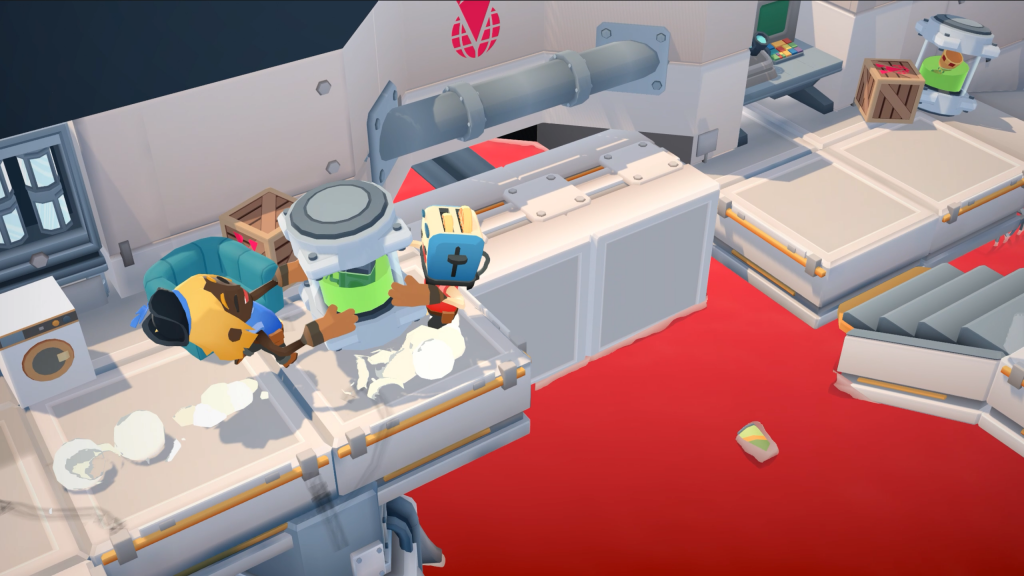 Some of the game’s value comes in the ability to earn gold for completing the move under a certain time, and completing a handful of hidden objectives that reveal themselves after the first completion of the level. We usually just missed gold by a handful of seconds; although, we did get some of the bonus objectives like not breaking a window or stealing a turtle. The objectives allow you to open an arcade which contains 10 standalone challenges for you to beat. Things like taking one piece of furniture across a bending catwalk and tossing a handful of packages across a set of moving fans into packing trucks. At the current price point of $25, it’s hard to argue that the price point isn’t spot on provided you have someone to place with. And there lies the, somewhat big caveat.

Much Like Overcooked 1, Moving Out is a couch coop game. Emphasis on couch. With my ignorance as to the amount of hours or cost of implementation of an online infrastructure, I won’t even delve into why it wasn’t included, but it is a downfall in such a game that could support an online matchmaking system. Having said that, Steam Remote Play worked near flawlessly to mimic the couch coop feel. Playing with a fellow Dual Pixels writer from literally the opposite coast (I’m in San Diego, CA and he’s in Tampa, FL), there was nearly no lag on his end and only a few times where the resolution dropped for a couple minutes. All things considered, not bad at all! Would an online lobby have been ideal? Sure. But, remote play did its job just fine.

A Steam code was provided by the developers for this review. The game was played via Steam Remote Play. Game also available on PS4, Xbox One, PC (Steam & Microsoft Game Store) and Nintendo Switch.

First Screens of The Lord of the Rings: Gollum For PS5, Xbox Series X, and PC