Of all the EA Sports titles, their NHL franchise seems to have the least amount of additions year-over-year; which surely, in part is based upon the popularity of the NHL in contrast to its bigger brothers, Madden and Fifa. Thatâ€™s not to say that we donâ€™t have years that drastically improve the gameplay, but is NHL 18 that year?

One of the much talked about additions was the â€œThreesâ€ mode. As it so adequately describes, itâ€™s a 3v3 mode which aligns to NHLâ€™s new overtime rules. Although the threes in NHL 18 have a twist. Thereâ€™s only one faceoff a period, penalties result in penalty shots, first person to seven wins and, at seemingly random times, the next goal is worth two, three or four with the potential for your opponent to lose 1-2 points. If this didnâ€™t happen at such odd intervals, or if it was way more apparent visually, it would be fine; although it was more aggravating than anything.

The whole game mode, from the bigger hits to the more sarcastic announcers, makes it seem like it wants to be Â 3-on-3 NHL arcade, a last gen game that was as close to the Blitz series for NHL as we will get. But, it more so straddles the line between being arcady and the more realistic game, while not capitalizing on either.

While Threes is pretty meh for me, I do enjoy the addition of creative attack dekes and, more importantly, the ability to control your stick from the defensive side of the ice with the defensive skill stick. 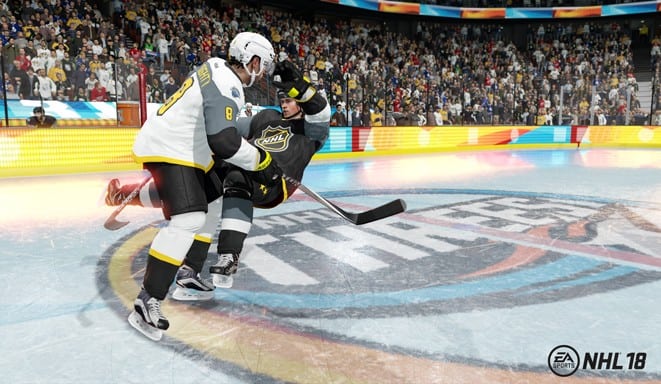 The addition of creative attack dekes, can go either way, but I like the new dekes added in, especially the ability to shoot and pass between the legs. Itâ€™s a unique addition that we are seeing more and more in hockey, and it is animated quite well. Surely, especially when playing EASHL or any other team mode variety, you will have puck hogs that will try to Crosby their way through the entire team, but thatâ€™s really the only downside to adding easier dekes. I am far more excited about the ability for better control on the defensive side.

Finally, the defense gets their own skill stick which allows the player to control the position of the stick when poke checking! It is such a godsend to kneel down and actually have the ability to block the passing lane when the opponents are coming down for a 2-on-1. Penalty kills should be slightly less aggravating this year.

As for the feel of the game, it really feels and looks like you would expect, minus slightly snappier menus, which, donâ€™t get me wrong, is a much needed aspect to the series. The movement feels largely fine; although, I felt the players stumbled over one another far too easily.

Judging solely from the beta, it looks like we have another decent game into EAâ€™s NHL franchise. At first glance, it wonâ€™t look drastically better than last yearâ€™s, but the additions of the creative attack dekes and some legitimate defensive abilities should be enough to whet our appetite until we see what else NHL 18 has to offer.