EAâ€™s NHL has consisted of strong entries for the last handful of years. Minus the first entry for this gen, (I believe NHL 15, which was barely skimping by with content) each entry has played exceedingly well. The latest game always plays as well as the previous, with minor tweaks that pull you in just enough to buy the next yearâ€™s title. But, weâ€™ve come to that point where there are diminishing returns with the series. That, or, the two more profitable EA Sports titles (Madden and Fifa) have made such large changes and included story modes that have been received well. Having said that, we did get a new mode this year in threes.

Threes as its name suggests, is a three-on-three game mode with each team having a goalie. The mode allows for a faster paced form of hockey since breakaways are abundant. Even the slightest hint of poor positioning and the opposition will have a break the other way. The game features a unique â€œmoney puckâ€ that can add multiple goals or subtract multiple goals to your total. Reaching the magic number of seven (or more goals) seems easy, but the task quickly becomes daunting when your opponent nets a money puck that adds two to their score and subtracts from yours. Threes switches out the normal broadcasting crew with two slightly more zany additions. They have more pizazz and are more jokey than in the normal hockey mode, but I feel like they could have gone even further. This really goes to the mode in its entirety. Yes, the pace is faster and the hits might be slightly bigger, but I was expecting something more akin to 3 On 3 NHL Arcade. That title is straight up arcadey. Itâ€™s extremely fast, the characters are goofy looking and the hits are much more vicious. 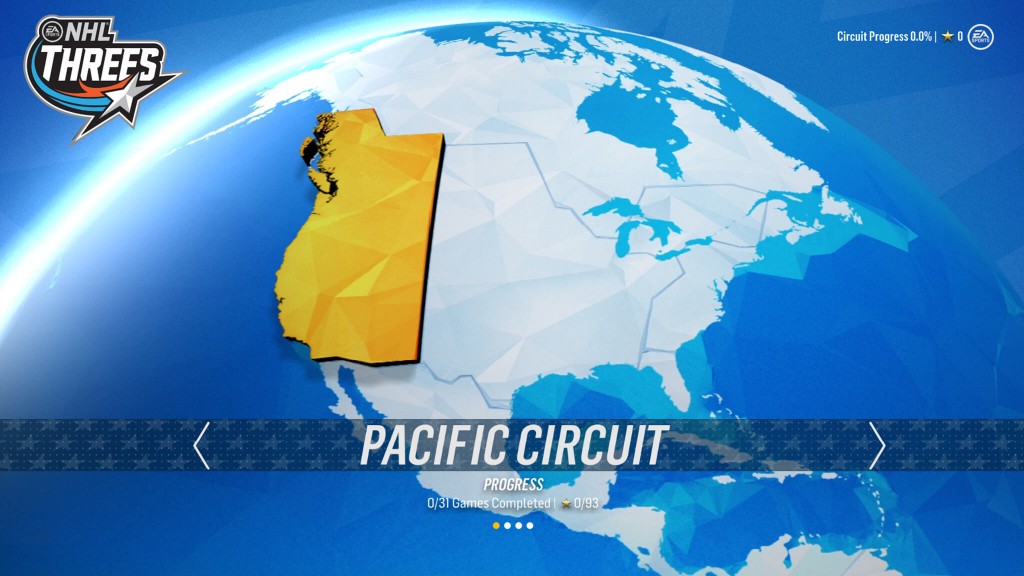 Threes kind of dips a toe into arcadey fun but quickly pulls back. I am only assuming that this might be similar to how the Blitz series seemed to die out when the NFL realized just maybe it wasnâ€™t a good idea to strictly promote the more dire sides of football, no matter how cartoony and outlandish the visuals may be. All’s not lost on the Threes mode, however. While I am a bit lukewarm on the mode itself, the way they packaged it up into a circuit makes it compelling.

If you happen to enjoy the idea of Ultimate team but hate the feeling that you have to drop cash to keep up, Threeâ€™s Circuit mode is perfect for you. You play through different circuits and win character cards to beef up your team based on your success through each game. Your stats are tallied up and the better they are, the more stars you get. The goal is to get the max of three. Getting three often earns you a customization item or a unique player. These players are integral to your success because they carry attributes like being a heavy hitter or a sniper. The customization does go relatively deep in this mode; although, you will have to play a lot of Threes to unlock the better options.

As for the other modes, they are pretty much identical to last yearâ€™s offering, with little niceties and depth added throughout. Franchise mode includes an expansion draft for the Vegas Golden Knights, more locations to expand your squad to and the ability to create a mascot. Whereas, Hockey Ultimate Team is catching up to its counterparts and has added in HUT Challenges to earn exclusive and timed loot. There is an intro tutorial with a nice presentation by Hockey Canada that features tutorials for the new additions to the deking system and the ability to actually control your stick on defense. Finally. The newer dekeing system is a nice addition since it adds in another layer of creativity at your fingertips. Yes, some of the dekes are difficult to pull off, but once you do it feels oh so sweet. 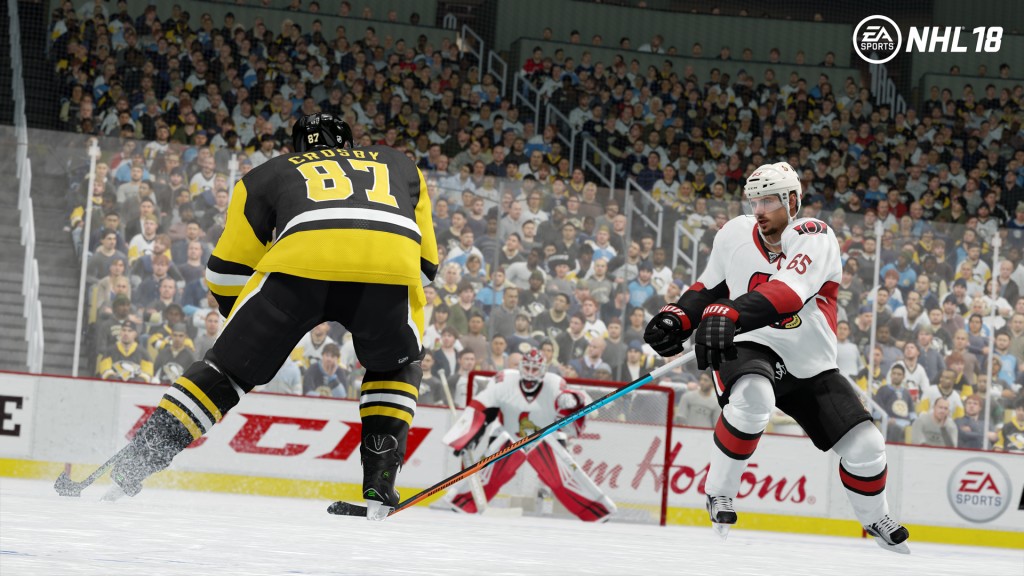 The entire game really does feel like it inched ever so closer to realism. The addition of a defensive skill stickÂ further pushes that idea. Now, you actually have the ability to block the pass when defending a 2-on-1 instead of hoping and praying your character would realize what you are trying to do. It may seem like a minor addition, but it forces both AI and human opponents to alter their strategy. Also added in are a multitude of coop experiences to partake in some couch coop. While EA has generally been great at adding in the ability to play alongside a friend both online and off, you can play in nearly every mode with another person. From Threes to Hockey Ultimate Team, you can share in the fun with a friend.

The main issue with NHL 18 is that, from a quick glance, it does fall into the whole â€œsame game with a roster updateâ€ year. The one big addition of Threes is good but not great and is certainly not the tipping point needed to push a purchase. The smaller changes, that actually make a big impact, are far harder to convey through gameplay and really only cater to hardcore players of the series. Itâ€™s hard to sell the importance of a defensive skill stick to the masses.