by Jose Estrella
in News, Nintendo
0 0
0

After a bit of digging, twitter user @pixelpar found a listing on theÂ International Age Rating Coalition. This listing is for a title named Eclair City, which from all the info gathered, looks to be coming from Nintendo. Eclair City is rated PG/ Mild Violence andÂ has aÂ tentative release date of December 16th, 2017. This could seriously be a new IP coming from Nintendo all along.

Unfortunately, no platform is stated whichÂ means that there is the possibility that this could beÂ a mobile or Nintendo 3DS title. Could this be a new IP featuring connectivity between all Nintendo Platforms and PC? Let’s hope! With a name like Eclair City, this certainly sounds to more like a codename. What do you guys think? Is this Nintendo just bluffing and secretly attaching names to existing titles? Sound off and let us know what you think. 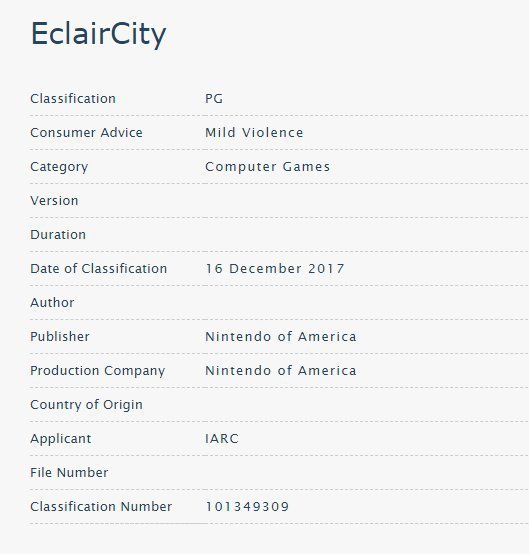