We’re seeing alot more indie games show up on the Nintendo Switch compared to other consoles based on release. This time we are getting Semispheres a melodic puzzle game coming from Vivid Helix. While the other released versions are not much different from each other in terms of content, playing a title like this on the Switch fits perfectly. Semispheres is a very easy game to get into and a hard one to master.

As soon as you load up Semispheres you are treated with no menus and are thrown right into the game. You control two small jelly fish creatures each with the left and right analog stick in this open area, you notice that there’sÂ a circle in this large area and that is a level. This empty area serves as a hub world where you can then travel to different levels each involving different puzzles. The goal of the level is for both jelly fish creatures to meet up at the end point which is a circle.Â In these puzzles you get power-ups to help you clear them, these are placed is specific spaces in the levels so you can figure out how to use them. One of the powers helps you create a portalÂ for one of the Jelly fish creatures to cross over into the other screen. 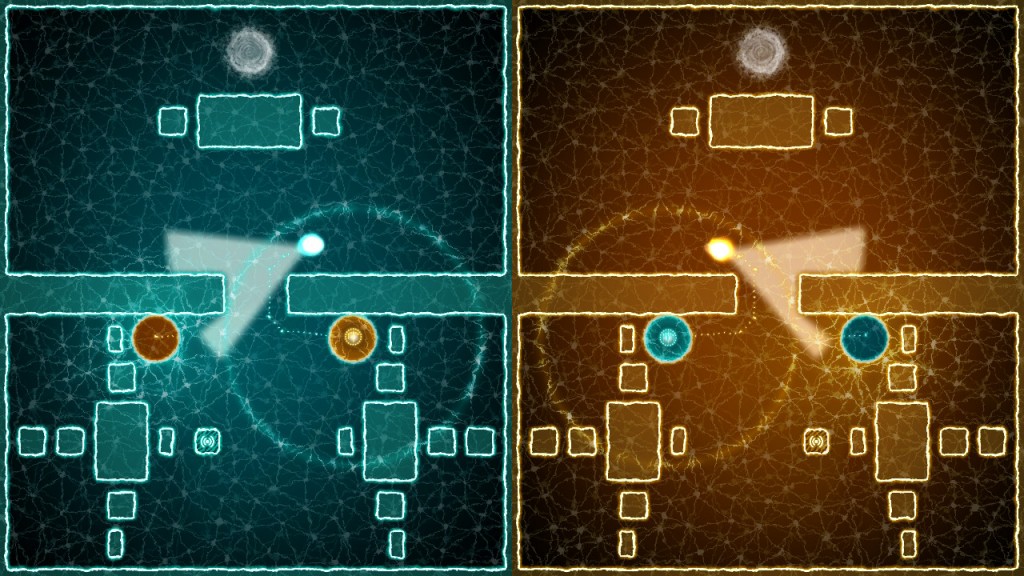 And yes i did mention other screen because Semispheres gives you access to split screen gaming each jellyfish you control has its own screen. The left is blue the right is orange Â so your controlling both at the same time using each side to your advantage to solve the puzzle. Get ready for alot of mistakes trying to figure out these puzzles, which makes me wonder why restart option is not set to any button on the controller, to restart a puzzle you have to hit the pause menu and then select restart level. Which in turn takes you out of the game and this game from the instant boots you straight into the game with no instructions, thats one small detail to miss because with the dedicated restart button it could have made it seamless.

As you progressÂ in Semispheres you start to noticeÂ the difficulty spike up,Â the steps to getting in and out of puzzles become more and more about movement and precise timing. I can totally see some people giving up to easily just because they may not think theres much variety. Every time you complete a couple of puzzles your treated to 3 panels of art that go along together like a picture book. A little more should have been done with these or should have just been completely taken out as some would not make any sense of it.

I can totally see Semispheres being played is short burst more then anything. The Nintendo Switch perfectly accommodates this by being a hybrid of a console. With its minimalistic look and sound your not getting much of a difference in terms of performance and presentation. For those who want a puzzle game they can play in short burst this may be the game for you, but if your looking for something long term this won’t scratch the itch.

PewDiePie: The N Word, Apology and His Responsibility

PewDiePie: The N Word, Apology and His Responsibility