Ever wonder what it’s like to be a Snake? Â Well Snake Pass is just that and more. Sumo Digital has created something fun, and it’s a challenging platformer.Â Snake Pass is definitely a game where you need to be patient, since you’re controlling a snake. Moving Noodle the snake can be as fun or as frustrating as you would like, and I think that’s the takeaway with this game. Â You’re either patient with the controls to love it, or you either get to frustrated with controlling Noodle. Personally, I felt like I was fighting the controls Â a majority of the time as the level designs became more complicated. You do have to wrap around a lot of objects to get to some extended places. Part me wishes they could have created a more unrealistic ways on how the snake moves just because fighting the controls becomes a chore later on. After becoming a bit frustrated with the controls, I had to investigate the settings, and lo’ and behold changingÂ the game over to easy made the game much more enjoyable. The challenge is still there, which I thought was great. The easier controls changed up the need to move with the triggers on the switch; instead, you hit forward and you just automatically go which makes it less trivial.

Another interesting thing about the controls; you hit the A button and you start to slither up so that you can reach higher places. That is paired with your hummingbird buddy lifting up your tail with the press of another button. Again, this is where I wish physics wereÂ more unrealistic or flexible. The hummingbird can obviously only pick you up at a specific height, but I get that the game would be too easy if he were able to pick you up and drop you off anywhere. 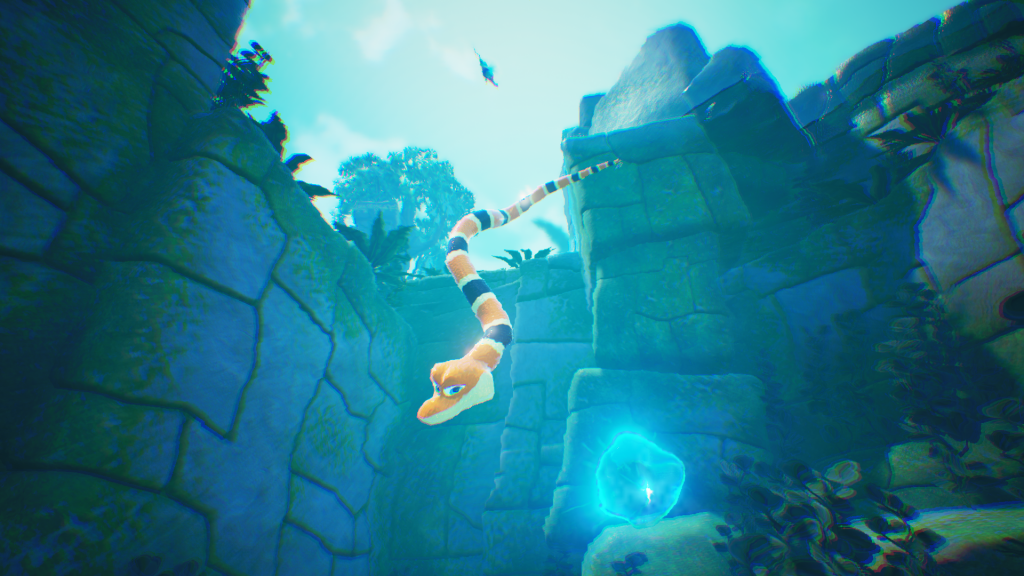 On the Switch, Snake Pass graphically looks good when you hold it to the standards of other handheld games. Â But if you’re very critical about resolution, I haveÂ bad news for you. While still great looking, Snake Pass looks a bit blurry, on handheld, as the resolution looks lower than native. While docked, Snake Pass looks sharper, but overall, it’s still a treat and very colorful. Using the Unreal Engine 4, it really shows that the Switch can handle better things than we expect. The soundtrack to Snake Pass made it very relaxing when all the control issues are out of the way. Ex-Rare composer, David Wise, created the soundtrack for Snake Pass and it delivers. It’s very pleasant to the ears and has a nostalgic touch to it. Snake Pass really gets you in the mood to explore a jungle. Sooner or later, you’re going to be humming tunes from Snake Pass.

Overall if you do want something new on the Switch, I wouldÂ recommend this game even though the controllers are a hassle at first. I feel that Sumo Digital should have made the default controls Easy mode as it will keep new players from dropping the game due to the controls. For $19.99 on the Switch, this is definitely a good title to cleanse your palateÂ from all the Zelda you must have been playing.

*Review Copy was provided by Sumo Digital, Snake Pass is Also Available on Playstation 4, Xbox One, and PC.

Catwoman Gets Her Claws Out In The Latest Injustice 2 Trailer

Catwoman Gets Her Claws Out In The Latest Injustice 2 Trailer