by Rob Hernandez
in News, Nintendo
0 0
0

Merely a few months after their big E3 info blowout, Nintendo announced a new Nintendo Direct focusing on the upcoming Super Smash Bros Ultimate. The nearly 30 minute Direct had quite a few surprises and several tidbits of information. 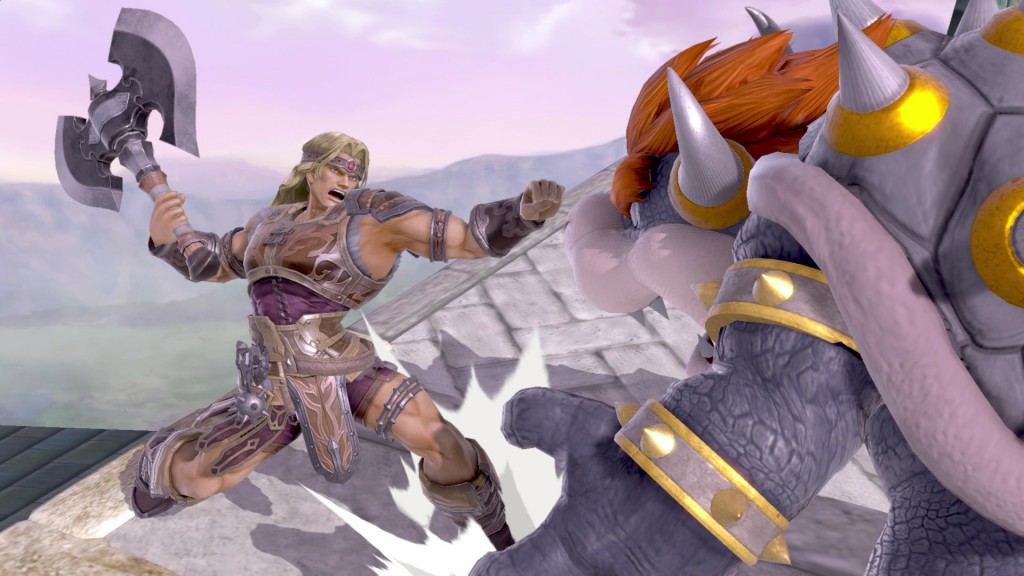 The Direct starts of with a pre-rendered video of Luigi with his Poltergust exploring a dungeon and getting unceremoniously reaped by Death itself. Leading up to the big reveal of Simon Belmont’s arrival in Smash Bros as well as his echo, Richter. 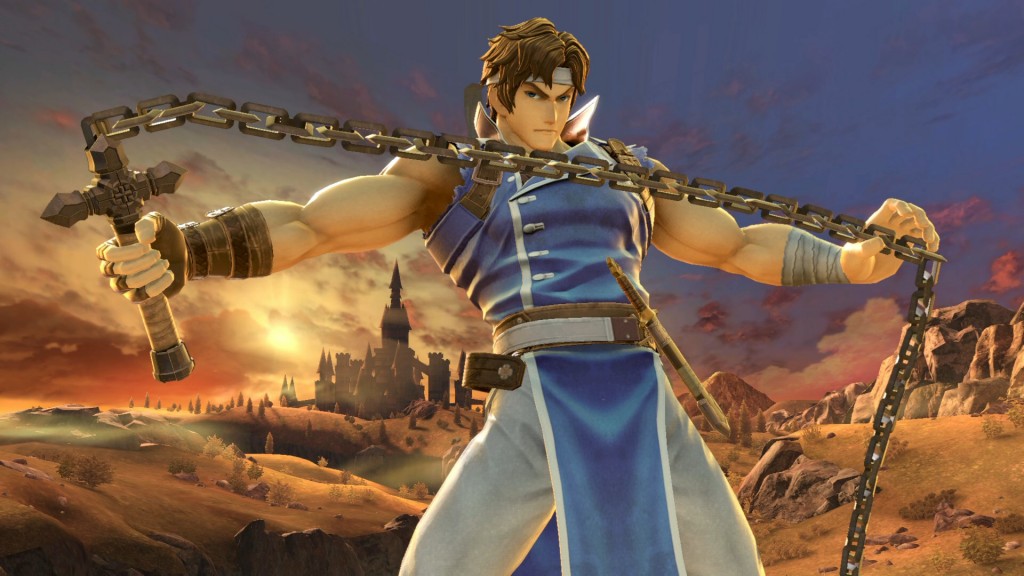 Simon Belmont sports his whip, the Vampire Killer. His whip will have a slower attack speed, but a much longer reach than other characters. In addition to his signature weapon, he has access to the most famous Castlevania subweapons; the axe, the cross, and holy water. His Final Smash puts his opponents into a coffin which he then slings with various magical effects doing substantial damage.

Along with Simon’s appearance, Dracula’s Castle represents Castlevania in Ultimate. The familiar candlesticks can be hit to drop items. As for stage hazards, mummies, Medusa, The Creature and Flea man, as well as Death and Dracula, show up to harass the fighters. To nicely compliment Dracula’s Castle’s aesthetics, there will be 34 music tracks, new and old, across the series. 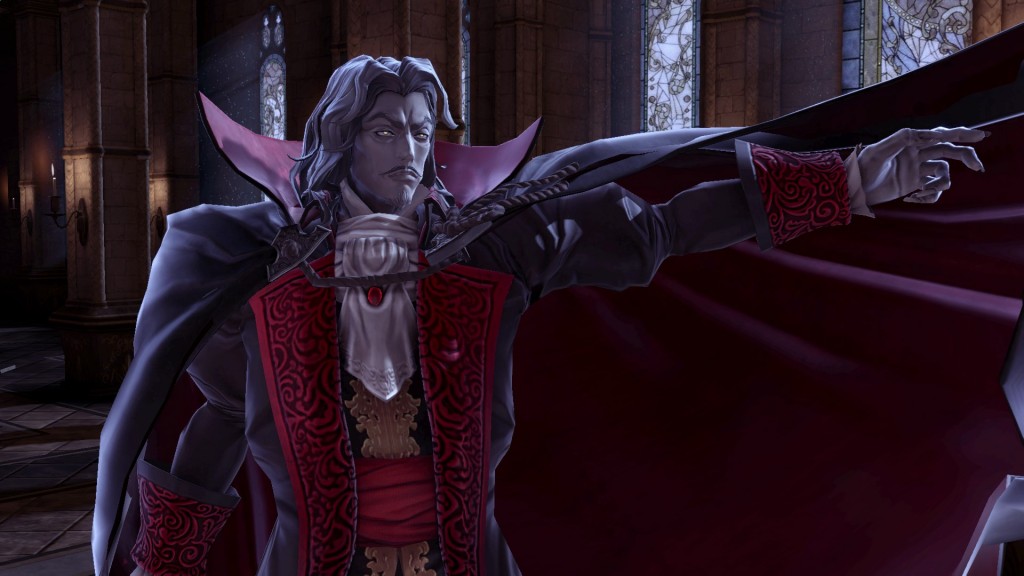 Who can forget assist trophies? Alucard represents the Castlevania franchise sporting very familiar moves from Symphony of the Night. Moves such as transforming into a bat or mist. 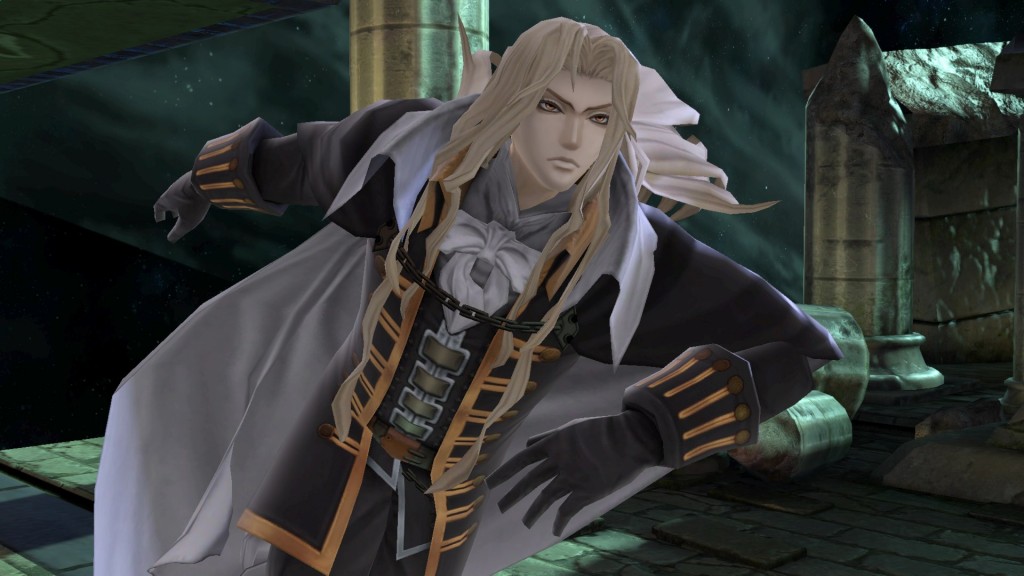 Richter also makes his appearance in Super Smash Bros Ultimate as Simon’s echo fighter. While having a moveset based on Simon, he looks, sounds and moves differently from him. Making him his own character.

Two more echo fighters have also been announced, Chrom from Fire Emblem and Dark Samus from Metroid Prime. Chrom was originally in Super Smash Bros. for 3DS and Wii U as an alternate skin to Lucina. While Chrom was in a Smash Bros previously, Dark Samus is making her series debut in Smash Bros Ultimate.

Echo Fighters will have a few options in how they are selectable on the character select screen. Players can decide to show all Echo Fighter as separate entries, or as an icon that can be toggled by the press of a button. 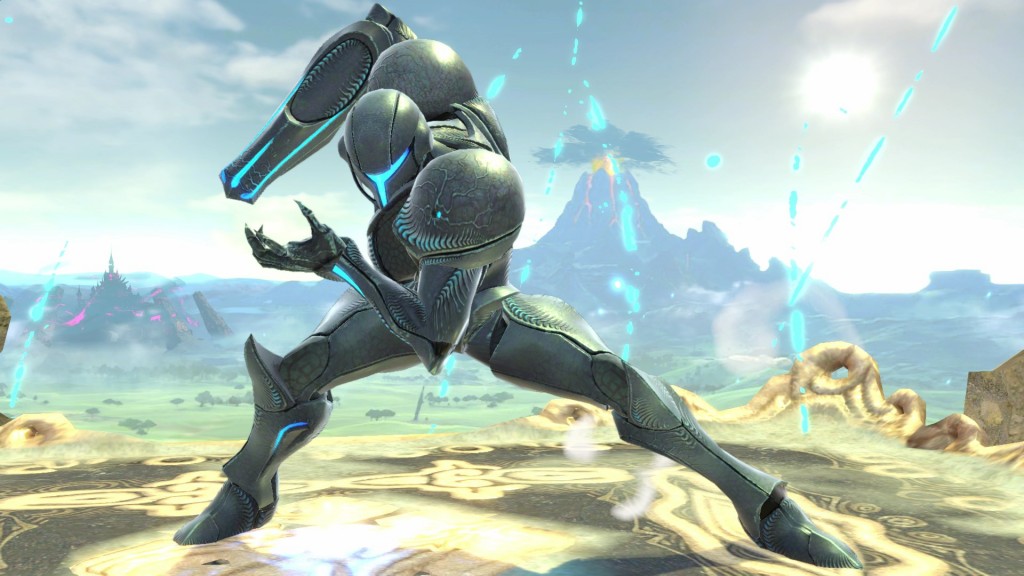 On the topic of additional fighters, Sakurai also mentioned that there were a few more characters to announce before the games release in December.

Several stages from previous entries are available in Super Smash Bros Ultimate, such as Flat Zone X, Great Bay, Shadow Moses, Gaur Plain, and others such as PokÃ©mon Stadium, Brinstar Depths, and Summit. The old stages have been lovingly refined from their original appearance and given a re-balancing. For the stages of the original game, the developers have focused on keeping the look as close to the original as possible while still updating it. Of course, there would have to be a handful of new stages as well. Fresh from Super Mario Odyssey is New Donk City Hall. The stage takes fighters across the building and will allow players to have Pauline sing her #1 hit song, “Jump Up, Superstar!”

When all is said and done, Super Smash Bros Ultimate will have 100 unique stages and each stage will have Omega andÂ Battlefield variants. All stages will be playable in 8 player Smashes and available from the beginning. Stage Hazards will now have the option to be turned off. Allowing players to further customize their experience. Players will be able to select two stages that will change mid-battle. The frequency will be up to the players.

My Music from Super Smash Bros for 3DS and Wii U is making a comeback in Super Smash Bros Ultimate. The songs are now organized by series. For example, any Legend of Zelda stage will have access to ever Legend of Zelda song in the game. Ultimate will have over 900 tracks spread across in-game music and menu music. Culminating into 28 hours of music. The game also offers a sound test menu, allowing any song in the game to be replayed. As well as allowing players to listen to the music from the Switch with the screen turned off. Adding in playlists, Ultimate will delight any game fan who loves classic video game music. In either the original form or remixed. 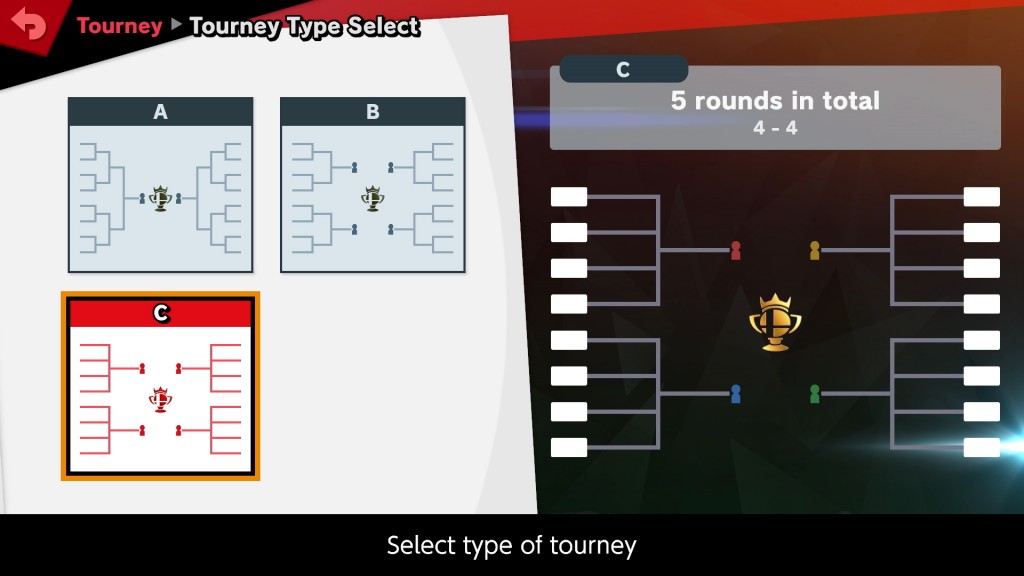 Rules will now be the first thing players can choose when starting a battle. Custom rules can be saved to be instantly selectable. Stamina battles are now available as one of the main battle modes. As Nintendo previously stated, the stage select screen appears before character select. Allowing players to select fighters that compliment that stage. Sudden Death, along with starting each character at 300{3a19833c997fa52158a43c449fe089ff048ac0506a335cac10721cfa396ff282} health, will have the camera zoom into the field. Final Smash can be charged in battle as opposed to breaking a Final Smash Ball. The charged Final Smashes will be less powerful than their original counterpart and two players cannot perform one at the same time.

There will be new battle modes available as well; such as Squad Strike. Squad Strike offers 5-on-5 or 3-on-3 elimination style battles. Which pits 2-10 players against each other until the last team is left standing. Tourney mode will allowÂ up to 32Â players and AI participants to create a tournament bracket. Smashdown is a new mode that keeps players from selecting the same characters twice. Once a battle is over, any characters selected will no longer be available to be selected for the next round. 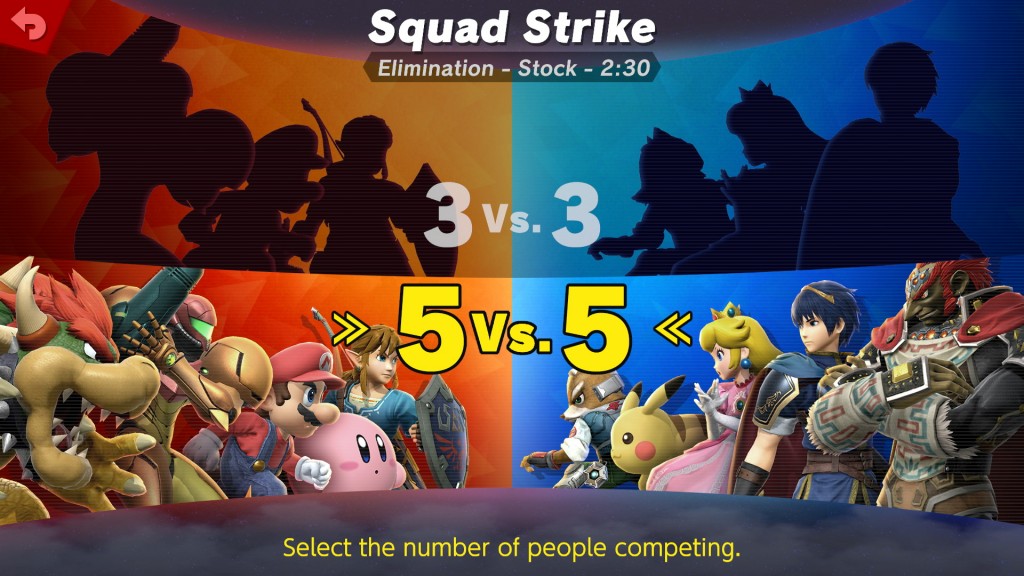 Training mode will be revamped. A gridlike stage will be exclusive to training mode. The stage will help determine distance and trajectory when working on attacks. Classic Mode will play similarly to an arcade mode allowing players to fight specific characters on specific stages and some specific challenges.

With new characters and stages comes new items, PokÃ©mon and assist trophies. For new items, there is a banana gun which fires one round and the peel can be tossed on the ground to be used as a regular banana peel. Killing Edge is a sword that glows when it gets stronger. Picking up Bomber will create an explosion that hurts all nearby fighters except the one who held it. Death’s Scythe will knockout any players who have taken a lot of damage. The staff has its power increase based on how far away the target is. While the Ramblin’ Evil Mushroom reverses the opponent’s controls. The Rage Blaster does more damage the the higher the user’s damage percentile is.

For PokÃ©mon, Alolan Exeggutor makes an “extended” appearance. Abra takes characters and teleports them to random locations in the stage. Solgaleo and Lunala let out controlled energy blasts. Mimikyu drags characters under it’s disguise and does some massive damage to them. Pyukumuku attacks those who get a little too close. Vulpix and Alolan Vulpix let out a fire-y and ice-y blast respectively. Marshadow leaps out of the shadows and does a punch toward opponents. Ditto finally makes his Smash Bros appearance after being found on game data on a previous title. Ditto duplicates the character who called on him and attacks.

And finally, assist trophies are showing off some new faces. Characters such as Zero from Mega Man X, Knuckles the Echidna, Krystal from Star Fox, Klaptrap from DK Country, Kapp’n from Animal Crossing, Chef Kawasaki from Kirby, Gray Fox from Metal Gear Solid, Nikki from Swapnote, Shovel Knight from, well, Shovel Knight, and the Moon from The Legend of Zelda: Majora’s Mask. Not only that but Rathalos from Monster Hunter is a boss and an assist trophy. The only character to appear as both. 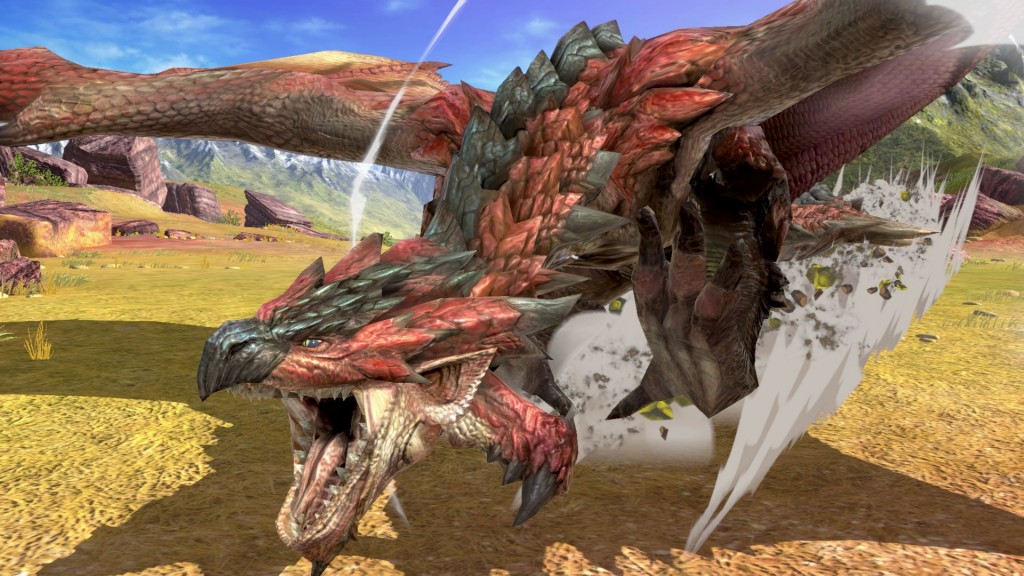 The main menu still has a mode which hasn’t been shown off, but will be shown off at a later date. On the home screen, a dashboard with quick access to things such as home, messages, and settings is available. The dashboard will appear by pressing the ZR button.

And not one to leave a Smash Direct as is, Sakurai showed off one more highly requested character King K. Rool. The final boss of the Donkey Kong Country games. K. Rool is the second Western created character to appear in Smash Bros as a playable character, after the Rare created Diddy Kong. 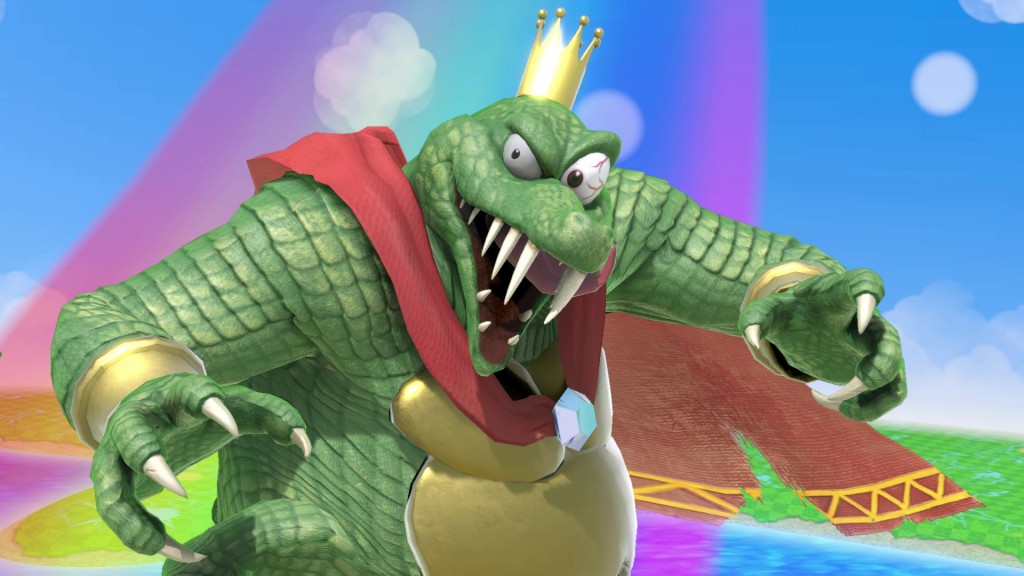