Arrowâ€™s latest episode actually felt like a turning point in this season for me. Oliver is facing one of his biggest hurdles in prison. In present Star City, someone is attacking the glades, and the residents are unhappy with the response from the police, which puts Dinah in hot water. Weâ€™re also seeing a bit more of the future Star City, and the future is not a bright one.

Oliver succeeded in getting sent to Level Two, but thatâ€™s only the first of what appear to be many hurdles. Oliver has been flagged as being a danger to other inmates and himself. Now, he must be cleared by a shrink before heâ€™s put in with the other inmates. It also seems like theyâ€™re putting Oliver through other forms ofâ€¦ analysis? While it wasnâ€™t explicitly stated, it looks like they are using the seclusion and the lights as another way to â€œtestâ€ Oliver.

Oliver is being resistant to answering the shrinkâ€™s questions, so they give him a drug to make him more comfortable. He talks about the moment when he became the Green Arrow; Oliver takes the shrink back to surviving the boat crash and the trip to Lian Yu because of the sacrifice from his father. While Oliver sees this as a sacrifice to save his life, the shrink, Dr. Parker, says that his father only condemned him to the life of violence. He goes as far as to ask how William would feel knowing his grandfather was a murderer. 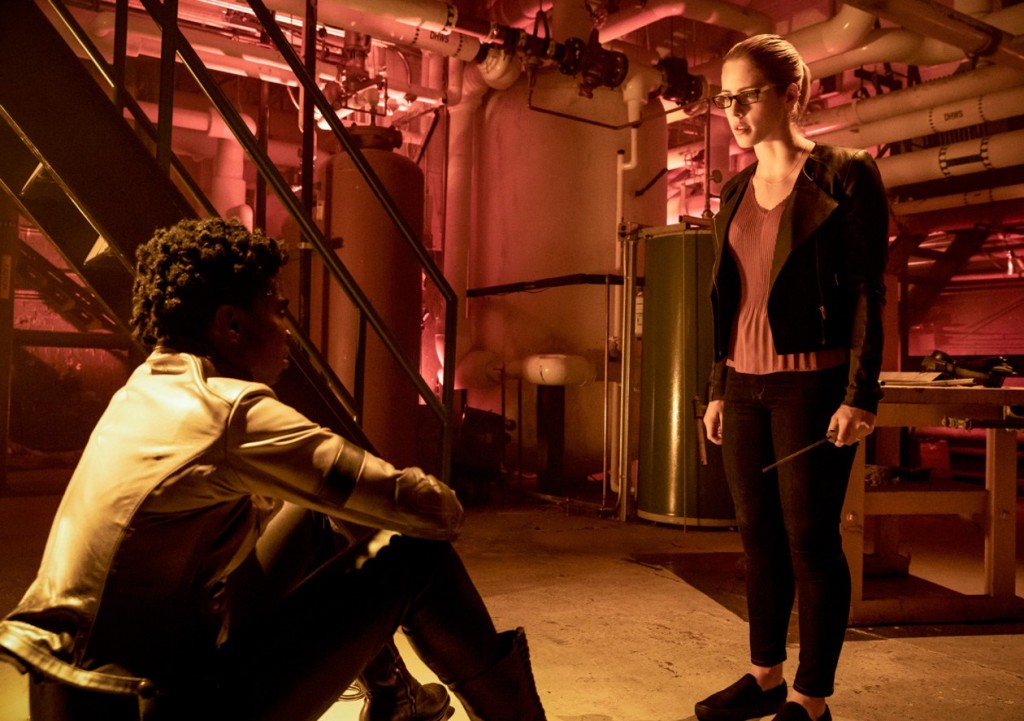 When heâ€™s not with Dr. Parker, Oliver takes up meditating. He actually seems peaceful until they force the drug on him to make him cooperative. Dr. Parker is trying to reform Oliver, so he can return to his son. Dr. Parker wonders if William will continue the circle of violence and become a murderer like his father and grandfather. When Oliver resists, Dr. Parker urges him to let go of the past. Only then can he spare his family of his sins, whatever that means. When Oliver resists, Dr. Parker calls in â€œthe machine.â€ When Oliver is in this machine, he goes back to his last moments with his father. Dr. Parker asks Oliver to imagine that William is there with him, and he asks Oliver how he would react if the tables were turned. Oliver sees himself telling William that heâ€™s destined for great things. Itâ€™s unclear if Dr. Parker is going to clear Oliver, but only time will tell before Oliver is able to join the rest of the inmates in Level Two.

The new Green Arrow had a huge role this week when some arsonists are setting fires in the glades. Residents in the glades are highly frustrated with the Star City Police Department, and Dinah takes a verbal beating at a town hall meeting. Residents of the glades actually preferred when vigilantes were present as they had a much faster response time than the police. These residents feel like they arenâ€™t getting the same treatment as the rich areas of the city.

When they catch up with the arsonists, Dinah agrees to let the Green Arrow go as long as they catch the true bad guys. It helped that Diggle reminded her that Quentin was willing to work with vigilantes when it helped to take down the real criminals, even before he knew that Oliver was the Green Arrow. While Rene and Dinah are back on good terms, we didnâ€™t really get any more information on the new Green Arrow.

In this weekâ€™s flash forward, we see the future of Star City, and it isnâ€™t looking good. The GPS coordinates on the arrowhead have changed, leading Roy and William to Smoak Technologies. The police find them, but a vigilante comes in to save Roy and William. It turns out to be future Dinah Drake. It looks like she hangs up her police shield at some point in the future. Dinah tells them how Star City fell when the glades rose, and you better be invited into the glades because outsiders are not welcome. At Smoak Technologies, William finds a rubix cube that he believes will open a message from Felicity. He opens up the cube to find a map of the glades, but Dinah drops the bombshell when William wonders why Felicity doesnâ€™t just reach out. It turns out that Felicity Smoak is dead.