The Titans are officially together, hence the name of the episode. The Nuclear Family is working to get their stepfather, and then they are back to hunting for Rachel. Dick Grayson thinks that itâ€™s about time they each learn of the powers of the group. But, Dick seems to be the most reluctant to reveal himself to the group.

The Nuclear Family is incomplete without the father, so what can they do? Donâ€™t worry, a new father is on the way. Heâ€™s just going through some tests first to make sure heâ€™s ready. Obviously, these people undergo some sort of brainwashing. Once the process has been accelerated, the stepfather is ready to join his family. The four of them embark on their journey to find Rachel by any means necessary.

Dick had to trade in the Porsche for a minivan, so everyone can fit more comfortably and they can blend in a little bit easier. He finds a cheap motel, and they go to an abandoned barn to do a little bit of show and tell. Kory is starting to figure out her powers. She doesnâ€™t know much, but she does know that it feels like she can pull the energy of the sun. This means that she has to recharge after each time she uses her powers, and sheâ€™s weaker at night. She tests out her powers and realizes that her aim could use a little bit of work. Of course, now she has to recharge before they actually battle the Nuclear Family. 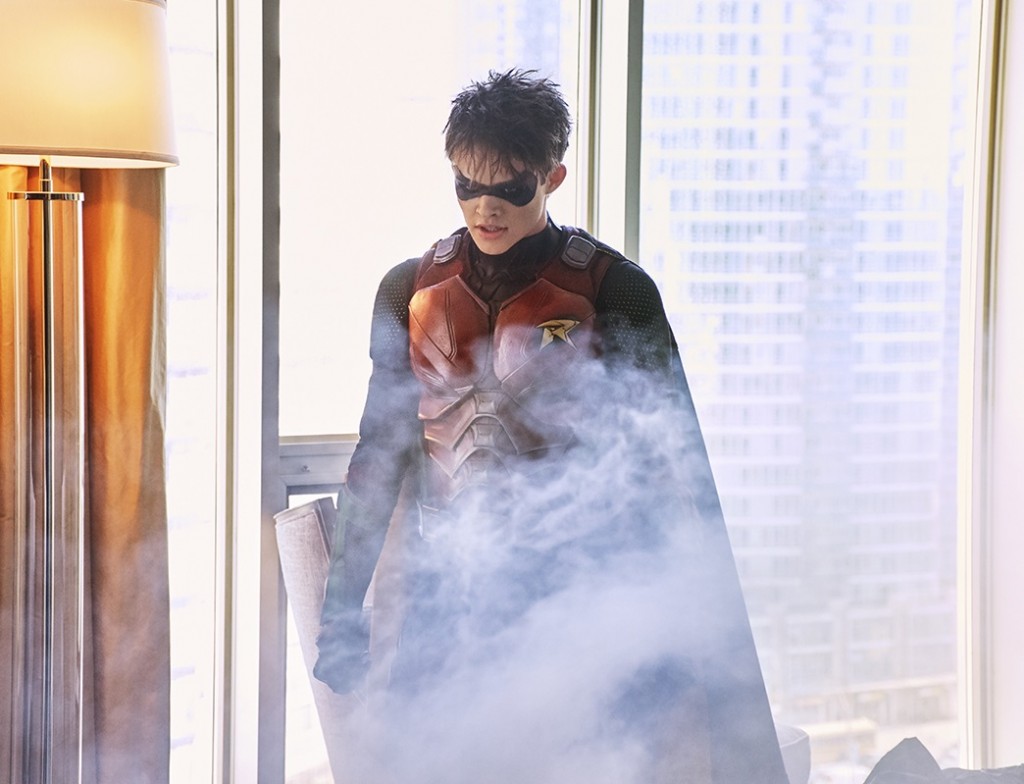 Gar is ready to show off his power, but he has to undress. Everyone is confused, aside from Rachel, until he comes out as a green tiger. He shows off a bit before turning back into his human form, without remembering to grab his clothes first. Oops. Dick asks Gar if heâ€™s eaten anyone, to which Gar nervously laughs. Heâ€™s never even bit anyone let alone ate someone! Dick asks Rachel to try her powers and says that she needs to stop being afraid of that part of her. When it looks like sheâ€™s spiraling out of control, Kory knocks her with a small fireball. Rachel is fine, but itâ€™s clear that everyoneâ€™s powers could use a bit of training.

They decide to not continue anymore training after Dick refuses to display his gifts. They return to the motel to get some rest. Dick feels bad that he is turning them into weapons. He knows that once you see the world that way, you canâ€™t go back. Kory sees that Dick is afraid to let people know who he is. Since she doesnâ€™t even know who she is, sheâ€™s hoping that they can figure it out together. She tells him that he needs to show them what he can do; he has to let them in for this group to work.

We know thereâ€™s no rest for the wicked, which means that in the middle of the night is the perfect time for the Nuclear Family to catch up to our Titans. They catch the group off guard, but Dick is just trying to get to his case with all of his toys. Kory goes to protect Gar and Rachel, but they end up surrounded by the rest of the family. The three are struggling to keep the family at bay, when in comes Robin in full gear. He takes care of the rest of the family, so they can tie them up and get some answers.

Of course, this is the first time the rest of the Titans have seen that Dick is Robin, and they are speechless to say the least. Naturally, Gar is a fan of Batman, but Dick makes it clear that Batman isnâ€™t going to show up. Now that the family is tied up, they reveal that they are trying to deliver Rachel, but thatâ€™s all they will say. Dick can tell that they are brainwashed, so he searches their car. He finds a GPS that leads him to Illinois. He decides to follow the GPS while Kory stays with Gar and Rachel.

In Chicago, Dick finds Dr. Adamson. The doctor sees Dick coming; in fact, the whole building is wired for security. Once Dr. Adamson realizes that Dick is there, he presses a button, killing the Nuclear Family. Kory finds them without heads and realizes that Dick is going to blame her. Dr. Adamson welcomes Dick in and offers him a way out; they can leave now, or they will both be killed. Dick decides to stay and try to fight, but there are too many bad guys. Thankfully, someone else comes to save the dayâ€¦ someone who looks really familiar in his mask. Jason Todd, aka the new Robin, saves Dick Grayson.