After a tremendous stroke of luck, we finally obtained tickets for a Conan taping after trying for the past four years. The random draw for the showings is always popular, and the people trying for tickets far, far outweighs its allotment. Alas, we finally went to our first taping and here is how it went down.Â

Lines. Typical Comic Con fanfare. We had to wait early in the morning around Spreckels theater to receive our actual ticket from our ticket voucher. When confirmed, you receive a .pdf you have to print out for the opportunity to pick up your tickets! Sort of similar to a movie screening, you are not guaranteed just because you have that printed out .pdf saying you are allotted x number of tickets. The theater is slightly overbooked to ensure that if there are no shows, there wonâ€™t be an issue being able to fill the theater. Ironically, there are probably enough in the standby lines to take care of that. How early you would want to get there really depends on how nervous you are of not getting a ticket. We arrived just before 7:00amÂ  and tickets were handed out at 9:00am. It wasnâ€™t too long a wait, especially compared to anything else at Comic Con, but it was still quite funny to have to wait for a ticket after receiving confirmation of a ticket. Luckily, after getting your tickets and wristbands, you can return up to an hour before the showing to be seated.Â

Iâ€™ve never been in Spreckels, or really any other theater that didnâ€™t have the words movie precluding it, but Spreckels, while clearly old (especially noticeable in the seating) is an amazing theater. Albeit, that statement is with nothing to which to compare. We were in the left balcony area, but itâ€™s safe to say that every seat in the place had a fantastic view. Thankfully, as Iâ€™ve seen from the pictures from other theaters, the theater seating actually goes up quicker than it goes long. So, everyone feels like they are on top of the show.Â Â 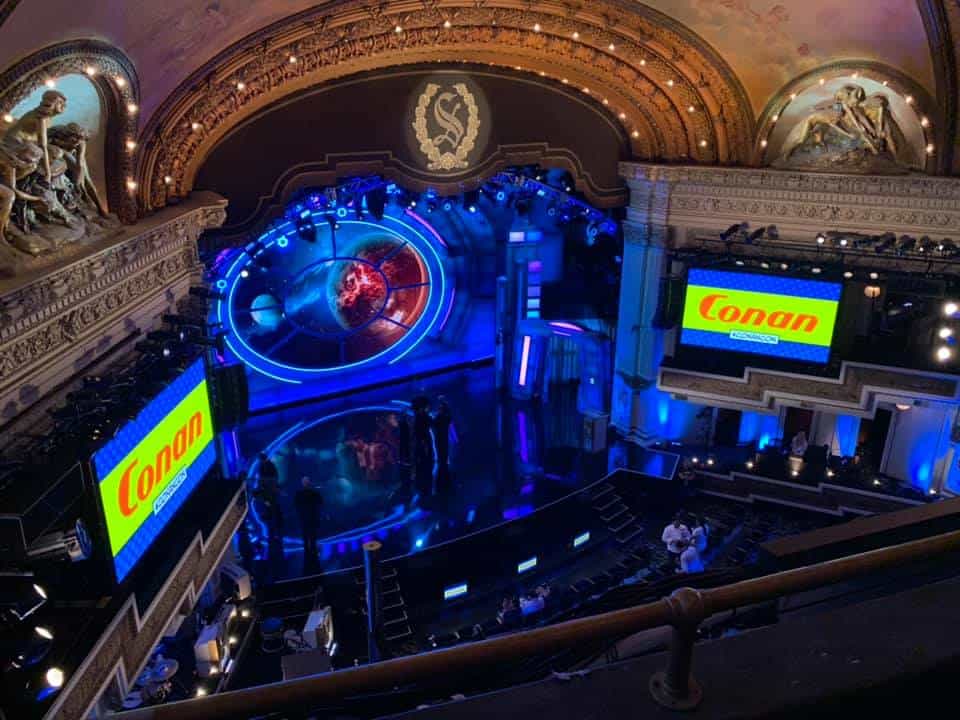 This being my first taping of anything, I didnâ€™t really know what to expect when things kicked off. How would the commercial breaks go? Would we be told to applaud? How long would it run? Thankfully, a â€œhype-manâ€ of sorts explained exactly what would go down. It all pretty much concluded to being excited, loud and applaud when the flashing applause sign lit. Easy enough. Everyone there had a grin ear-to-ear, and Conan is such an entertainer that he made it quite easy. It might have helped that they kicked off the pre-show with pulling 20-ish people from the audience to dance onstage for a prize.

The special guests were entertaining and provided their unique flair in skits, but I did forget how little time the main guest actually gets on stage. We got to see the stars of Carnival Row (Cara Delevingne and Orlando Bloom) and they couldnâ€™t have had more than 5-7 minutes speaking with Conan. Iâ€™m certainly not in the position to direct a show such as Conanâ€™s, and they are obviously uber successful at doing so, but it would have been nice to get even a semblance of what in the world Carnival Row was about from its two leading stars.

After the show, we were funneled out and handed the infamous Conan Funko Pop Figures. But, that was really just the start to the excitement. In an alley next to the theater, fans lined up (somewhere around a couple hundred Iâ€™d say) waiting for Conan to sign their Pops. And guess what, he signed them.. .pretty much all of them. As we were waiting, people began to become apprehensive of the fact that we were halfway up the block and Conan wouldnâ€™t even get to us, but security explained that last year he signed Pops all the way to the corner or the alley. A guy who has done four shows in four days still signed nearly everyoneâ€™s figures. In all honesty, I was absolutely floored by his commitment to his fans.Â

If you ever thought of attending a Conan taping due to being a fan or just hear about it, you absolutely have to do it. It pulls you a bit away from the craziness of the crowds, and you get to enjoy the behind-the-scenes look at a show taping.Â