Defiant Development brings us back to the table with a well-thought out and expertly crafted action-based card game sequel, Hand of Fate 2.

The first Hand of Fate title melded an interesting and unusually compelling card game with a halfway-to-Arkham combat style, but its story was a bit straightforward, as was the actual pace of play.Thankfully, Hand of Fate 2 pulls a trump card and fixes that and the few other minor issues I had with the first title. The moment-to-moment storytelling brings the card game to life and allows for care to actually be noticed in a world thatâ€™s brimming with stories of heroism and despair. The game is divided up into 22 unique adventures, which at first glance, appear similar to the previous title. Although, that statement couldnâ€™t be further off. Where the previous game was pretty much to battle lesser cards to find the boss at the end and rinse and repeat throughout, Hand of Fate 2 treats each of the 22 challenges, as self-contained adventures.

Each of the 22 challenges has a sort of theme, from fortifying a base to discovering who is about to murder a key figure, the straightforwardness is almost completely done away with. Sure, certain adventures do stick to that formula with a slight twist of gimping or buffing your character from the onset, but there are many unique stories that unfold through each adventure. Defiant slipped in a couple unique tricks to expand the straightforward paths of its predecessor as well. As mentioned above, the fortifying base adventure has the character foraging for wood and stone to fortify the base from an enemy. This involves trying your luck at the pendulum swing and dice rolls to achieve the largest number of supplies from each instance. Then, the character would have to traverse back and choose upgrades to fend off the enemies. Itâ€™s sections like this that forced me to realize the chances the devs took from the previous game. A simple coat of paint and revamping the combat slightly would have done the trick, but they went a bit further and hit a home run. Since these levels are a bit less linear than previously, there are times where you will be struck down by theÂ rng gods and keep having to recommit to a certain section that can take you upwards of 20-25 minutes. The redoing part wasnâ€™t too frustrating, but I still hate the minor lull that happens after you die.

While it’s easy to see the changes done to the levels, the battle system appears the same, but it also has received a few nice touches. It was a bit hard to tell what was going on in the last Hand of Fate as it pertained to blocking and riposting. Nothing really felt all that clear, and I never really did mesh with the controls. This titleâ€™s combat went full Arkham, and that is nothing but a good thing. The cues of what you should be doing are easily recognizable, and the combat turns into more of a game of reaction time than frustratingly fumbling a controller or keyboard. 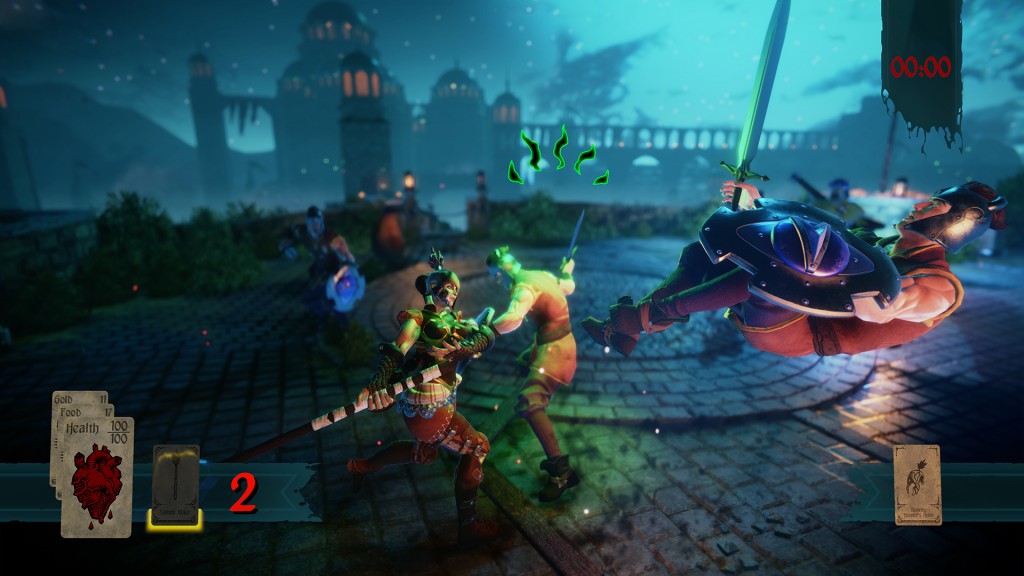 Quality of life changed of giving you the ability to select gear prior to most battles to exploit your enemies weaknesses is also a pleasant change. For instance, thieves are weak against daggers so you can usually alter your loadout. However, there are times where you will be ambushed and forced to use the weapons in which you originally had equipped.

The few issues I had were the seemingly inconsistent frames from a special attack rendering you vulnerable and then invulnerable. It may have been intentional, but it felt weird that the very start of a special/execution attack would allow you to take damage, but a split second after that and your character was invulnerable. Again, not a big deal, but I would die many times until i realized only part of the special/execution would allow you invulnerable. The only other issue I have is with the enemies. They do perform different attacks from one another, but it is hard for them not to feel samey, which makes the game feel a bit like it is droning on in the various combat sections.

Adding a bit of flare to the combat system is the ability to take a companion alongside you as you fight. The four companions are vastly different from one another and can help you in a variety of ways, including the ability to trigger a unique attack (or spell) to alleviate some of the tension when fighting on that last drop of life. But the more interesting addition revolving companions is the ability to learn more about their stories. This is shown off through quests from cards within an adventure. Itâ€™s not a monumental addition, but a nice way to further round out the strong storytelling of the title.