Harley Quinn: The Animated Series: The Eat. Bang! Kill. Tour Issue #3 is out now, and if you’re a fan of the HBO Max show, you should pick this up. If you haven’t watched the show, you’re still able to enjoy this comic series. Harley Quinn is as wild as ever, with plenty of hijinks. 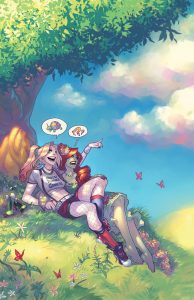 The comic series starts with Poison Ivy and Harley Quinn beginning their relationship, and we know that they both have just a little bit of baggage. In this third issue, Ivy and Harley are attempting to go on a date. The comic starts with them on their date at a fancy restaurant, but Hush shows up and starts a fight. Harley breaks the fourth wall and addresses the audience. She then starts to fill the audience in on how they got here. It was very on brand for both this series and Harley Quinn, and I thought it fit perfectly.

I won’t spoil the whole comic, but you’re in for a treat if you want to pick this one up. Trouble keeps following Harley Quinn, and Commission Gordon is out for blood. A former foe becomes an ally for Harley to try and keep Gordon in check. There’s also a snippet that shows that Harley and Ivy have friends in the LGBTQ community rooting for them. All in all, Harley Quinn: The Animated Series: The Eat. Bang! Kill. Tour Issue #3 is a bundle of fun and a great read.

Exo One | A Stunningly Beautiful Journey

Exo One | A Stunningly Beautiful Journey