DC Black Label’s “The Human Target: Book One” released Tuesday November 2nd to comic book shops, and the rave reviews are already coming in. Tom King and Greg Smallwood have created a mystery centered around Christopher Chance aka the Human Target. Chance takes on the identities of his clients as they are targeted by assassins. This iteration of The Human Target shows an older, more weary Christopher Chance, taking jobs in need of money.

Let’s first take a look at the art style in this comic series. Greg Smallwood has outdone himself in this first issue. The art is stunning and draws you immediately into a rich world of deception. Writer Tom King gives us a glimpse into Chance’s inner dialogue which enhances his interactions both as himself and posing as Lex Luthor. I’ve seen this story described as teetering on noir, a Hitchcockian thriller, and as having aspects of Mad Men, and I agree with all of those assessments. I love a good murder mystery, so I am all in. Spoilers ahead for Issue One which is out now! 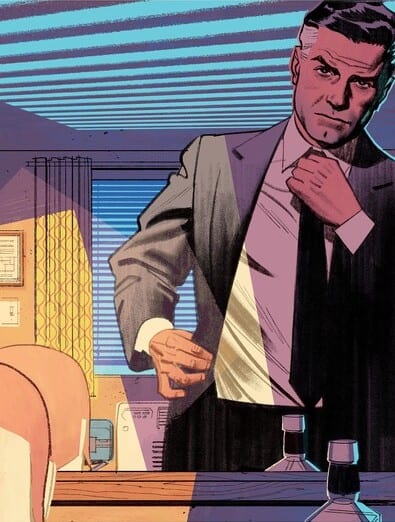 This 12 issue whodunnit will center around Chance solving his own murder. In this first issue, Chance poses as Lex Luthor. Now, usually, Chance wouldn’t agree to a client as notorious as Lex, but times are tough. Chance foils the assassination attempt and all is well. Or so it seems. Not only was the assassination attempt partially staged by Lex himself, but someone else has poisoned Chance while he was posing as Lex Luthor.

With the help of Dr. Midnight, Chance has 12 days left to live, and thus 12 days to solve his own murder. Who wants Lex Luthor dead? Aside from everyone, this case is sure to take some thrilling twists and turns. The first wrench in the works? The poison Chance ingested has markings that could only come from the Justice League International. Did one of them try to kill Lex Luthor? Is there reason to believe that down the line we might suspect that this assassin knew it was Chance posing as Luthor? So far, it seems like everyone in the extended DC multiverse is a suspect, meaning we could see some very well known faces in the coming issues. Where do you think this series is going, and who poisoned Christopher Chance?