Prior to Insomniac taking over, Spider-Man games were released to a bit less fanfare when stabled by Activision. Those titles were never outright egregiously bad, but they never really seemed to move the needle. In a sense, they fell into a lull similar to Spider-Man movies released during the same timeframe. With Spider-Man popularity being at its all time high as Marvel continues producing gangbuster films in their Cinematic Universe, does Insomniac do the newly reignited love for the character justice?

Marvelâ€™s Spider-Man was always a title that I wanted to love, even during its first showing two years ago. There’s a gaping hole for a AAA developed comic title, and Insomniac wholly capitalized on this fact. The game is solid through and through, from the traversal to the combat, thereâ€™s almost nothing to complain about. To my surprise, those two aspects of the game, while outstanding in their own right, might land in second and third place to the outstanding story.

Spider-Manâ€™s story weaves throughout various iconic areas from the Spidey Universe along approximately 15-20 hours throughout Manhattan. The approximate run-time for Spider-Manâ€™s first exclusive next-gen adventure appears to be a bit short, that is, when comparing it to other open-world character-driven games. The thing is, the length is actually appropriate. There is never a dragging feeling while exploring Manhattan nor does it feel as if half the content was cut for post game release. Its side-content also doesnâ€™t turn into mindlessly finding collectibles to progress through the story. Do they often help? Certainly, since they aid in unlocking more useful gadgets and suits with a special power. But, the game never forces the player down a route they donâ€™t intend to go. The collectibles are there for those that have that completionist itch, but are in no way required to continue through the main storyline.

Â The main story features a who’s-who of Spider-Man lore, including Vulture, Shock, Electro and so on. There is certainly no shortage of villains, and Insomniac did a great job in integrating each one within the story. None of the major villains feel like castoffs or that they received less screen time than the other. While each of their â€œboss fightsâ€ were somewhat unique, there wasnâ€™t all that much strategy needed to defeat them. They essentially all turned into a dodge-environmental throw-fest. Having said that, they did all present their own unique superpower to dodge which further pulls you into the universe. As was revealed in early footage, you do get to play as two other characters, Mary Jane and Miles Morales. Their gameplay segments almost always involve insta-fail stealth sections. In almost any other iteration of insta-fail stealth games / sections, I absolutely loathe them, but they arenâ€™t that egregious here.

Â It could be that they make sense in how they are portrayed or due to the fact that they are generally pretty easy. They seem almost as a means to simply drive more plot points home, that which they do a great job at doing, than actually providing a challenge.These segments also provide some levity and really work to ground the overall story. This certainly includes the parts where you play as Peter Parker as well. Gaining a deeper insight into the interconnectedness of and overall persona of Peter Park is done through simple puzzle missions almost exclusively in Doctor Octaviusâ€™ lab. The two sets of puzzles, one where you have to align items in a spectrograph and the other completing various circuits, work to further expand upon the story and vault it forward in many aspects. The best part? If you donâ€™t like puzzles, thereâ€™s an option to skip them. This is something that all developers need to implement. I can completely understand why people might think these sections are a bore, and for those people, thereâ€™s that option. As these villains and storybeats are spread all throughout Manhattan, locomotion was one of the key aspects Insomniac absolutely had to get right, and they did.

What a Tangled Web We Weave

Â When you think of Spider-Man, the first thing that comes to mind is web-slinging. The second thing that comes to mind is how it was at its often agreed upon pinnacle, Spider-Man 2 on PS2. While my experience with the game is nil, I can say that the web-swinging in Marvel’s Spider-Man is a blast. The controls are simple enough to get you to where you need to go but also deep enough to give you freedom of movement as to how you get there. Itâ€™s nearly impossible to mess up the swinging, aside from losing momentum here and there, but the fact that Insomniac didnâ€™t make it challenging only works in its favor. As much as this is an older retelling of a tried and true story, your Spider-Man has the basics down enough where web-swinging isnâ€™t a chore. Instead, i found myself swinging around Manhattan to discover the tiny intricacies that lie within while traversing the landscape.

Â Itâ€™s the simple things about swinging which make it so great. Swinging is easy enough by holding R2, but the animations when Spider-Man runs into certain situations is what has really pulled me in. If youâ€™re between two buildings and web-zip, Spider-Man shoots two webs out and vaults forwards instead of the usual single web. If you zip to a perch point (R2 + L2) that is between the bars of a water tower or through a pipe, Spider-Man theatrically whizzes through and out the other side. Even more, if you are wall running, a simple hit of the circle button will make Spider-Man shoot a web to fling around corners.

Â Most interesting of all, however, is that (it was confirmed via a Twitter questions) Insomniac recorded two sets of lines for Spider-Man when in the open-world. One when Spider-Man isnâ€™t exerting himself (like walking or being perched on a ledge) and when he is exerting himself (such as when web-swinging or running.) Itâ€™s the small aspects of locomotion which exudes charm and forces a smile on my face every time I pick up the controller. Itâ€™s the subtle things that you often stumble upon and the lightbulb goes off on what is exactly happening and why it is so charming. As charming as swinging is, and I continually take time out of each day to just swing around, an open-world gameâ€™s strengths always include the content surrounding the main story. 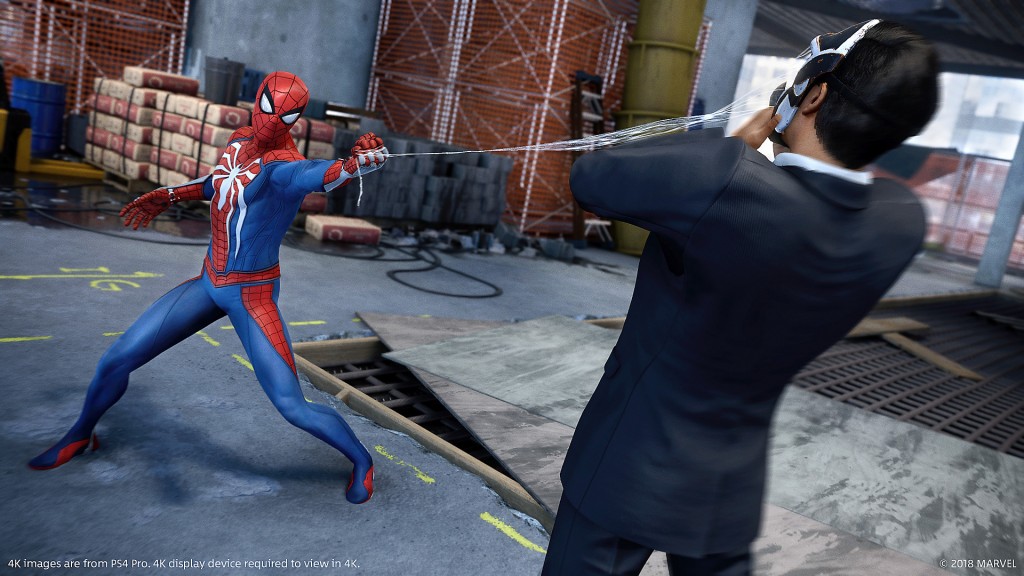 Open-world games often fall into the trap of giving you tons of things to do but with little reason to do them. The side quests turn into straight collect-a-thons and hinder the drive to want to progress throughout the titleâ€™s main story. Spider-Man strikes that perfect balance of providing reasons to do the different side quests and attain collectibles throughout Manhattan. The sidequests hit somewhere in between quick one-offs to more developed sequences. Sadly, the expectations of side quests being â€œThe Witcher 3-like,â€ as is always brought up since that game released, falls quite short. There are really no deep storylines involved with the oft-short side quests, but thatâ€™s not to say that the side quests didnâ€™t do wonders for world building. We are introduced to some iconic characters from the Spiderverse and get some lore through collectibles which are helpful when it comes to upgrading to a new suit, your gadgets or your abilities.

A Web of Endless Possibilities

While the side quests didnâ€™t necessarily hit the mark that was so elevated by the folks over at CD Projekt Red, they took the best approach to collectibles. There are a variety of collectibles and tokens associated with them and a handful of different challenge types which also have their own tokens. Whenever a game decides to toss out so many different types of tokens for upgrades and the like, it usually becomes a cumbersome chore of managing how you will spend the plethora of tokens. Thatâ€™s really not so with Spider-Man. I did heavily delve into side-content and went out of my way to collect the backpacks (since they have snippets of lore attached) and other tokens to unlock more suits, but I never felt forced to do so. That goes with a lot of what Spider-Man has to offer. There are a handful of abilities that are easily obtained, as are the vast majority of the 27 suits the game has to offer. Better yet, even, is that the suits that come with abilities can be transferred to other suits. Donâ€™t like the look of a suit but want the ability? All good. Go into the menu and instantly swap it out.

A lot has been said about the combat since its first reveal, and you couldnâ€™t go two seconds without seeing the comparison to Arkham combat. While it is clear they did (as many character action games do) take inspiration from Arkham, Insomniac really made the combat their own. Where Arkham games felt like they locked you into combat, Spider-Man presents you with far more freedom, and probably one of the most important aspects, fun. The combat is straight up fun. It seldom gets repetitive due to having such a variety of tools at your disposal and equally as many ways to web up or beat down your foes. The waves of enemies at hideouts is the most cathartic way to experiment with the various ways to use your abilities. With every encounter, I was finding news ways to take out enemies. The neat touch that, even when kicked off of buildings, enemies are webbed so they donâ€™t actually die. Just another nod to the Spider-Man weâ€™ve come to know and love.