NBA 2K19 is the 20th installment in the long running Basketball simulator franchise developed by 2K Sports. This years game marks the 20th anniversary of arguably one of the most consistent sports franchises in the market because of how well it emulates and understands the real NBA game played on hardwood floors.

The milestone was graced with a special cover athlete for the Anniversary edition of the gameâ€”LeBron James who is universally regarded as the best player todayâ€” while the standard edition cover athlete was none other than rising superstar Giannis Antetokounmpo. After playing 40+ hours of all the various game modes which included MyPlayer, MyCareer, and The Neighborhood with itâ€™s numerous activities such as the Under Armour Cages, the Jordan Rec Center, and 3-on-3 crew games, I found my self pleased with most of the core elements of the game. Yet, some egregious features, most notably Virtual Currency (VC) do stick out and hamper the overall experience of the game with the over saturation and emphasis on gaining VC.

The Gameplay and Presentation Is More Polished Then Ever!

There is no question that the developers over at 2K know the aesthetics of the NBA and nuances that make their game standout from other sports games. Animations are more fluid than ever before and within mere instants of playing the game, veterans to the series, like myself, can see a real conscious effort on how the franchise continues to polish the gameplay. Clipping has substantially been reduced, so body parts arenâ€™t going through other body parts or objects the way they did in the previous entry (NBA 2K18) and the flow of the overall game feels more sincere to the real life game with new enhancements added to defense which I took notice during my first ever exhibition game in 2K19.

I usually break in every 2K game with a quick exhibition game against the CPU, playing as my favorite team the Los Angeles Lakers with settings set on Hall of Fame difficultly and the camera set to 2K view. I then chose the Golden State Warriors as the opponent and in less than 30 seconds the game went straight into a cool intro of the Warriors ring ceremonyâ€”each player from the championship team that won the 2018 title received their ring from NBA commissioner, Adam Sliver, giving off that authentic NBA moment.

As a NBA nerd, I appreciated the level of detail that went into the introduction and the urge of excitement quickly took over me for my first game. I recognized in seconds that the players on my Lakers team like Brandon Ingram, Lonzo Ball, and Kyle Kuzma each had their updated tattoos, hair styles, and signature animationsâ€”itâ€™s pretty cool that 2K further polished Lonzoâ€™s unorthodox shooting motion from last years game by adding his accurate follow through motion after the shot. 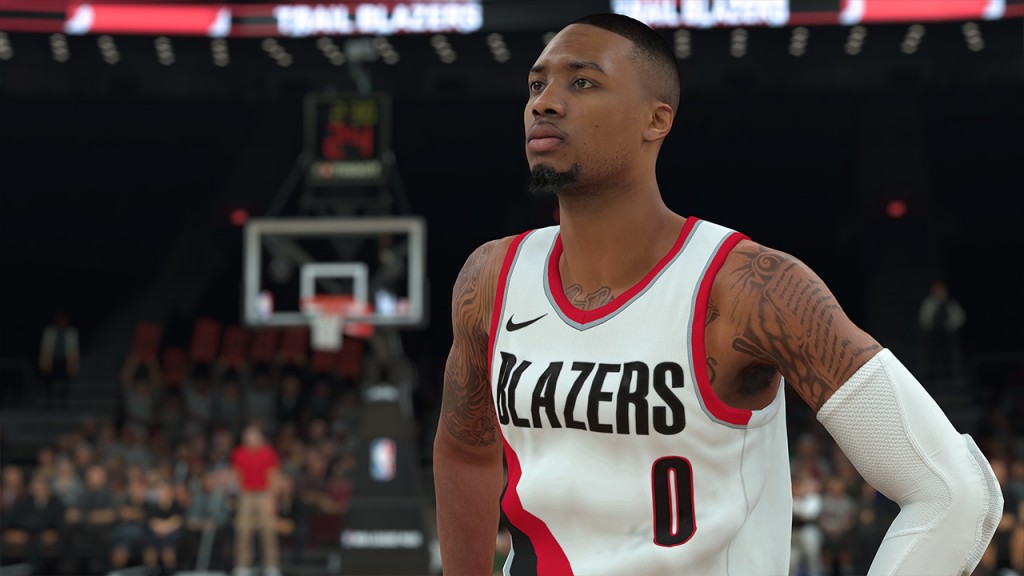 The aforementioned improved defense is another well welcomed improvement, making you think thoroughly on finding mismatches and creating sophisticated offensive plays to breakdown the opposing defense. I found myself during one play calling a high screen, blocking off the defender in front of me, and creating a passing lane to a teammate open in the corner for a shot. Consistent offensive sets like that were the only way I was finding a rhythm on offense and made me feel like every play mattered.

The improved physics and reduced clipping makes it so offensive players canâ€™t slide off defenders, adding a subtle layer of realism not found in previous entries in the 2K series. Closing out on ball handlers while holding down the L2 button and moving the right analog stick felt organic and small details like the shot contesting ring underneath the player made it clear whether or not the player was in the right position to contest. A yellow ring indicated a slight contest and a red ring indicated a smothering/heavy contest; seeing the ring felt satisfying and playing defense felt rewarding.

The offensive side of the game also got well welcomed additions with the inclusion of the new shot meter. Now the shot meter has been implemented on every type of shot including layups. Itâ€™s a small addition but it adds a whole lot with how every shot feels and the fluidity of how the game is played. Releasing the shot stick during a simple layup now requires precise timing similar to how it would feel in a real life game. 2K also added a game changing feature called the Takeover system. Takeover allows any player to gain a ridiculous boost in stats and literally takeover the game, reminiscent to going â€œon fireâ€ in older games like NBA Jam.

Every player in the game falls under a specific archetype such as slasher, lockdown defender, 3-point specialist, shot creator, etc. For instance, a player that specializes in shot creation like Kyrie Irving, can build meter by consecutively making shots. When enough shots are made his shot creator icon will prompt up in flames, indicating that heâ€™s in takeover mode. Again, the Takeover system works with any player as long as your dominating in their respective archetypeâ€”if your player specializes in defense and stops the the opposition from scoring then heâ€™ll go into Takeover mode. Takeover is a feature I hope sticks around in future entires because it feels good when clutch moments happen.

All the game modes are back but VC sticks out like a thorn.

All the traditional game modes are back (Blacktop, MyPlayer, online crew, etc) but the heart of all the game modes has historically been MyCareer and itâ€™s back and itâ€™s better…somewhat. MyCareer is the character driven story mode where you build your character from a draft night reject into an un-drafted superstar legend. I spent a bulk of the time playing Mycareer, and honestly I was left with both good and bad impressions. The good is that the story actually feels mature and unlike 2K18 the dialogue and plot arenâ€™t complete shit. 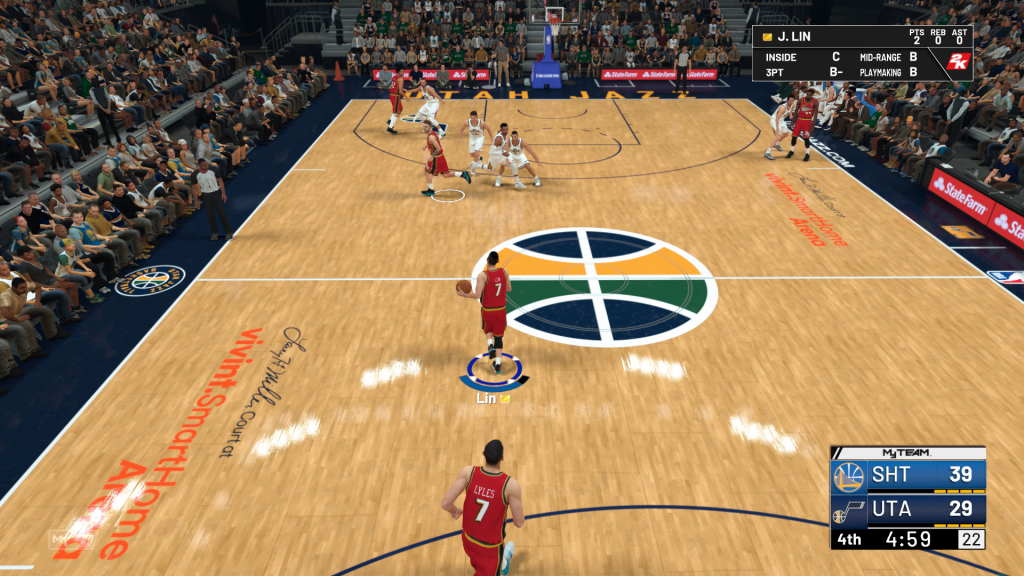 The story kicks off with you creating your player with your agent in preparation for draft night. After creating your player you go right into a cut scene where you agonizingly go un-drafted. The journey then embarks you to China as a scrub fighting your way back to the states hoping to make an NBA roster. As you play professional games in China and in the G-League you are judged based on how well you do in each individual game earning you VC to level up your character. However, the biggest underlying problems with 2K starts and ends with the insane amount of grind needed to obtain VC for leveling.

2K is making it very apparent that their focus is to sell VC and how to innovate on enticing players into laying down real cash in order to level up their created players. One of the biggest hurdles when jumping into this years game is if you didnâ€™t purchase the Anniversary edition of the game which included 100,000 VC and early access to the game, but at a whopping price of 100$. If you waited and purchased the standard edition (0 VC is included In this version) grinding can be without a doubt an unenviable duty for players hoping to reach average status. Achieving VC simply by playing the game is a bit easier compared to last years game due to the online Under Armour Cages where players can play alone online and gain VC through basketball drills and task. But thereâ€™s a catch, the higher you are in level the more VC is required to reach the next level.

Basically 2K creates an in-game environment that essentially is pay-to-win, unless of course youâ€™re willing to grind for weeks to gain merely enough VC for a couple levels. Itâ€™s a shame because the pay-to-win culture shouldnâ€™t be implemented in full priced retail titles and whatâ€™s worse is a game like 2K doesnâ€™t provide a whole lot of content aside from all the VC embedded game modes, achievements, and unlock-able cosmetic items (sneakers, outfits, trophies, etc).

Overall NBA 2K19 builds on what makes it addictive which is the gameplay and presentation, but the VC bullshit puts a dark cloud over what is otherwise a fun game to play. Playing as NBA superstars (LeBron, Durant, Curry, Giannis, AD, etc) never felt more life like then this entry. Animations are not prefect but very few sports simulators come close to the product 2K puts out year after year.

As a life long Basketball fan 2K has always been an unequivocal part of the â€œBall is lifeâ€ culture, but the future of the 2K series faces a serious issue with the riddled inspection of micro transactions that take away from how genuine the newer games are being developed. It almost feels like more time is being spent institutionalizing VC than adding meaningful and innovative features that push the genre to another level. Hopefully 2K can find some kind of middle ground with VC that doesnâ€™t insult the intelligence of the consumer and remind everyone why 2K is the king of Basketball video games.

NBA 2K19 was reviewed on the Playstation 4. It is also available on the Xbox One, Nintendo Switch, and PC.

The Last Remnant Remastered Announced and Arriving on The Playstation 4