Wolfenstein: Youngblood attempts to toe the standalone-in-between-main-game line as many games before it. With two new leading ladies and a lot of Nazi killing action, does Youngblood provide enough to quell the wait for Wolfenstein 3? It kind of depends on what you are looking for, as it does provide a fresh take on female characters and a fun cooperative romp through Neu-Paris.Â

A story picking up roughly 20 years from the previous game has both the challenge and ease of having to not cater to that exact storyline, but while still have to convey what happened in the time in between.While B.J. Blazkowicz was able to stop the Naziâ€™s from controlling over the United States, the same cannot be said for Europe.Â  A Nazi-controlled Neu-Paris is the playground where our two characters attempt to find their father. Featuring B.J. Blazkowiczâ€™s twin daughters, Soph and Jess, conveniently, clues were left behind and a tit-for-tat with the French Resistance allows the twins and the group to form a team to stop the Nazis from exerting their influence and for the twins to find their father. Add in a secret Lab, a doomsday device that was triggered after the death of Hitler, some alternate dimension shenanigans and god-like upgrades, and you have yourself a game premise perfectly fitting in the Wolfenstein Universe.Â

The main aspect which will surely be divisive is the attitudes of the two leads, Soph and Jess. BJ Blazkowiczâ€™s daughters are nothing if not juvenile, yet hilarious. From dancing in elevators, to saying â€œbad assâ€ every handful of minutes, they are extremely in-your-face, but itâ€™s somehow charming. Their lines do get a little rote when you hear them over and over, but itâ€™s a breath of fresh air to have women portrayed as actual human beings, even if they are a bit over the top. Their personas encourage the power fantasy because their cheering when they kill Nazis fits perfectly in the Wolfenstein Universe. The game fully leans into its absurd premise, and the leads are more than happy to match that intensity.Â 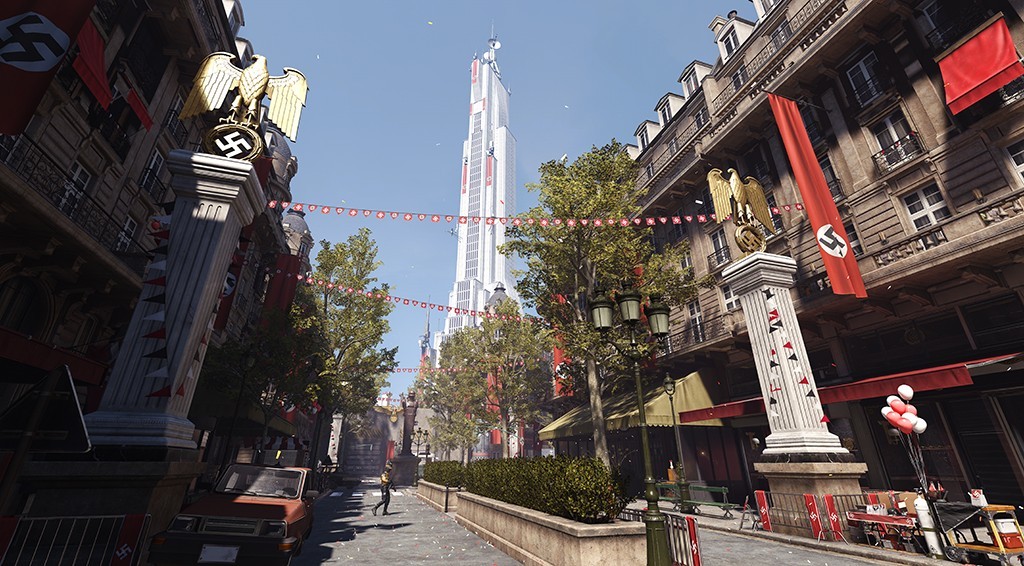 The hub-world for Youngblood is an interesting take. I can appreciate the slightly different locations splitting up the three â€œBrothersâ€ leading up to the final showdown, and I did enjoy how much of the buildings you could explore inside. What are often facades, or simply window dressing in many games, in Youngblood, you were given the opportunity to explore a lot of it. The main issue with a hub-world is traversing of well trodden territory, and with loading screens across each section and certain missions spanning multiple areas, it becomes a bit tiresome. Itâ€™s true that the first time you explore an area with little to no abilities is quite different than when you come back overpowered, but whereas it was fun to take on varying degrees of enemies, it later turns into how quickly I could run passed them. It was simply a means to an end to get to the point to progress the current mission.

A cooperative Wolfenstein seemed to be the perfect reveal. A slightly discounted Wolfenstein title that would allow for coop play whetting our appetites until a proper Wolfenstein is released? What’s not to like?Â

With the entire industry’s push toward more connectedness and Games as a Service, it almost always comes with some caveats. Unfortunately, Youngblood wears them on its sleeve. While perfectly able to be played solo, this game is really, really meant to be coop. Your AI partner isnâ€™t smart and will almost always stand and fight (and usually need to be picked up), even if you retreat for cover. Without anything more than having the ability to note which target you want her to go after, there are no commands for your artificial partner to implement any sort of strategy. As annoying as it is when you are trying to stealth a section, which is nigh impossible (especially in the early-game), and get stuck in a firefight with a half-useful partner, the game isnâ€™t too difficult that you canâ€™t manage. Itâ€™s just a lot less fun when going at it alone. Thatâ€™s not necessarily to the detriment of MachineGames as this game has, if I recall correctly, been shown off as a coop experience.Â 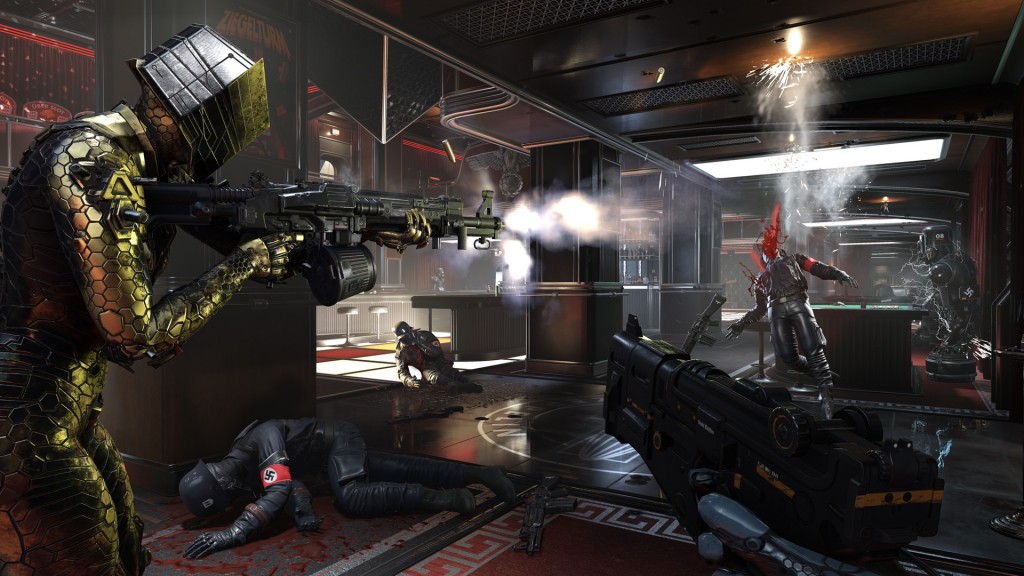 Outside of killing Naziâ€™s together, thereâ€™s really little interaction that would absolutely necessitate the two characters. The one key ability you do have is the ability to give a pep signal. This is a hand signal that gives a boost to armor, revive time, etc. Luckily, the AI partner does a good job of actually using these when you think they should.

With this being a coop title, though, you canâ€™t pause the game anywhere. Whether solo or not, you have to create a game to host or join one to even start off a game. Not having the ability to pause the action for whatever reason has always been an annoyance, especially when playing in a single player fashion. But, where I find the gameâ€™s connectedness annoying, I actually enjoy the live-service approach. While exploring through Neu-Paris, random missions will pop up like having to plant a car bomb in a key targets car, or having to save innocents that the Nazis are holding captive. They are smaller tacked on missions, sure, but they add a bit of life to the world. In addition to those, there are weekly challenges a laâ€¦ every game coming out now. Itâ€™s an interesting take for the Wolfenstein franchise, but I canâ€™t say I felt any real need to go back to it after completing the main missionâ€¦ yet! Having played a lot of the title solo, I could see where playing coop would provide an immense amount of enjoyment with power-leveled characters and the ability to access some of the more wacky armor and weapon skins.

Recent Wolfenstein games have felt great to me. The tactile feel mixed with the interesting overpowered weapons always brought a grin to my face. I can say that is the same way I felt when playing through Youngblood as wellâ€¦ mostly. You wonâ€™t find any new guns that werenâ€™t present in New Colossus (outside of one, Dieselkraftwerk), but one big change is the ability to upgradeâ€¦ wellâ€¦ everything. Jumping on the train of most recent games (shooters or otherwise), Youngblood takes on a huge upgrade system. From ability points gained through side-missions and the main story missions which allows you to upgrade your character with things such as more health, armor or stealth time etc, to the ability to modify each and every weapon you pick up with three different mod brands per gun enhancement. The gun mods also use a different currency in silver coins.Â

The character abilities feature a three-tiered tree; mind, muscle and power. Mind abilities skew toward providing you with more passive enhancements that help in-between those moments when you are killing Nazis. Things like more ammo off of enemies, additional armor / health when revived or when â€œpeppedâ€ and having a full mag when switching weapons are things you will be able to upgrade. The muscle tier deals with how much ammo, armor and heavy weapons your character can carry. While the power abilities deal with your ability to crush or cloak your way through Paris. These are things such as having the ability to crush into large enemies and still knock them down, and to extend your cloak time and having the ability to run while cloaked. Ability points to fill out these trees are gained through main and side missions in Neu-Paris. They arenâ€™t particularly hard to obtain, and the metro map will actually tell you how many ability points you will earn per chosen mission.Â 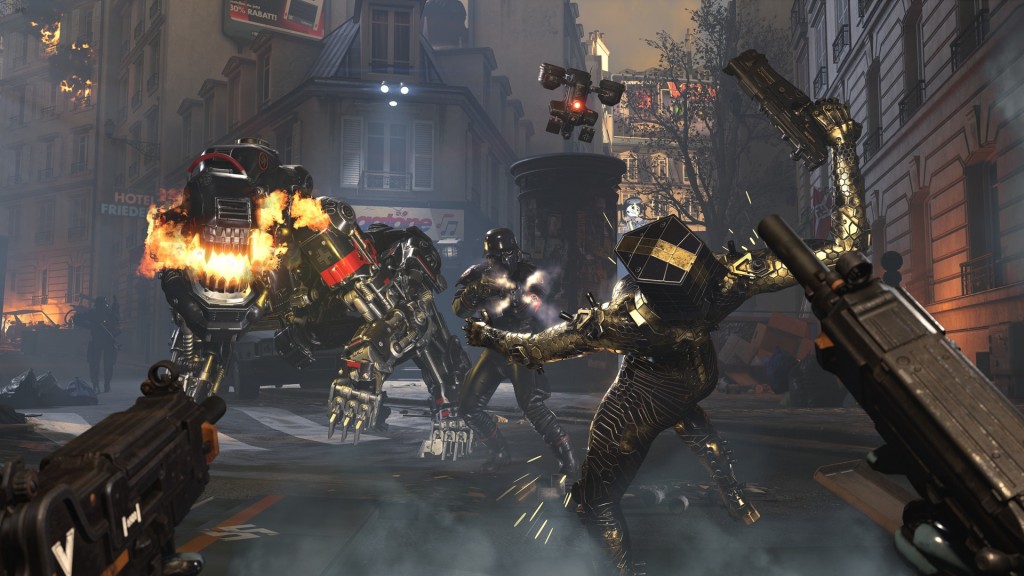 The guns in Youngblood are those you would expect, assault rifles, shotguns, etc, all guns youâ€™ve used in previous games in the Wolfenstein Universe. The most diverging addition is being able to modify weapons with mods from three different companies; Nadel: Bonus headshot damage, Tempo: Increased fire rate and Stier: Overall Damage increases. By utilizing any three of these from the same brand (for instance a Stier stock, site and magazine) will buff your character with an increased bonus based on that brand. Thankfully, silver coins, the currency used to obtain these mods, are quite plentiful. Once I completed the main storyline, I had every weapon fully upgraded outside of one. Just by cursory searching, you will find enough silver coins to quickly kit out your arsenal. A kitted out arsenal is always fun, but it leads to one of the more disappointing aspects of the game. Enemies have health and armor bars, but they donâ€™t necessarily feel spongy if you play by the game’s rules, since they do have weaknesses to certain weapons. Your gun has a bar with a certain pattern, and each enemy has a bar with a certain pattern. Match the bar on your weapon to the enemies armor bar, and your Nazi killing will be that much more effective. Itâ€™s a way of encouraging you to have to utilize a varied weapon set, but it also feels a bit forced in that sense. If other weapons did a decent amount of damage to armored enemies, it wouldnâ€™t be an issue. But you could lay round after round into an enemy, and if it isnâ€™t the right gun type, it will be all for naught. I get the strategy behind the idea, but it steps over the line of encouraging players to use different weapons and forcing them to do so.

The only thing less effective than using the wrong gun-type, is attempting to sneak through large swaths of a mission. The sisterâ€™s power suits allow for some sweet upgrades, but most initially interesting was the cloaking ability. The problem? Early on, with its extremely low active time, it is pretty much only useful to take out an enemy or two. Later on, with upgraded abilities, it does become more useful, but it still feels like it just doesnâ€™t fit with Wolfenstein. Sneaking certainly makes more sense in a game like Dishonored, so it would be disingenuous to knock Youngblood down for them including a subpar sneaking mechanic when Wolfenstein has always been about artistically killing Nazis.Â

A PS4 key for review was provided by the developers.Â