Doom Patrol is DC Universeâ€™s second foray into scripted television. With the success of Titans, Doom Patrol has a lot to live up to. Fans were weary of the dark, gritty, and violent world of Titans, but it seems most came around and embraced the grown up versions of Robin, Starfire, Beast Boy, Raven, and more. But the big question is, how does the lesser known Doom Patrol stack up?

The Pilot episode is hilariously narrated by Alan Tudykâ€™s character, Mr. Eric Morden, later known as Mr. Nobody. We first meet Morden as heâ€™s going to meet a Nazi, excuse meâ€¦ a cobbler, in Paraguay many many years ago. This man was a genius when it came to human experimentation, and Morden was itching to become something more. He has no regrets about undergoing this experiment and becoming a super villain. Once we see a snippet of his story, we switch over to our unlikely heroes. Donâ€™t worry, Morden constantly reminds us how unheroic these four characters really are.

Brendan Fraser plays Cliff Steele, a race car driver who barely survived a brutal crash, leaving only his brain. Fear not; Dr. Niles Caulder (Timothy Dalton) has no bounds when it comes to what heâ€™s willing to do to save someone. Dr. Caulder aka the Chief saves Cliff Steele, turning him into a robot with only his memories to keep him company. Cliff doesnâ€™t come â€œback to lifeâ€ until 1995, seven years after he is presumed dead. Cliff hopes that his wife has moved on, since he knows he would have, not that they had the best marriage after Cliff became famous. 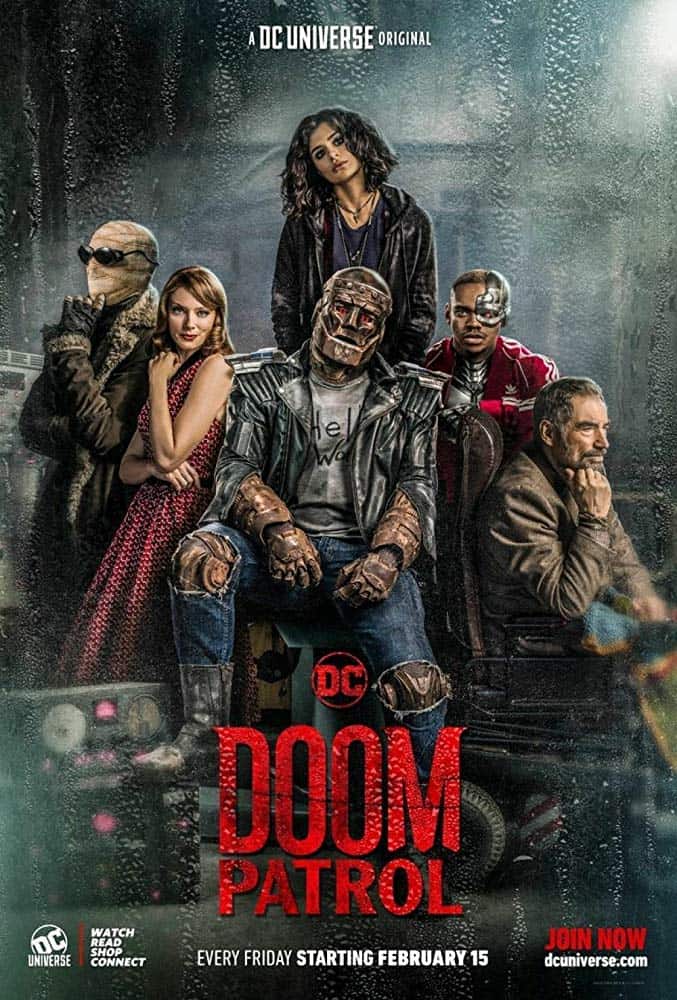 Cliffâ€™s memories are still fractured, and he canâ€™t yet move his robot body. But at Doom Manor, Rita Farr and Larry Trainor are already residents, there to assist in his recovery. Larry â€œflew airplanesâ€ back in the sixties, but thatâ€™s putting it lightly. Larry was on the cutting edge of flight, that is until a stowaway boarded his rocket plane, causing Larry to crash. But, Larry didnâ€™t die that day, and the stowaway seems to have stayed with him.

Rita was a queen of fifties cinema, and boy did she know it. Rita has an ego and is very focused on perfection when it comes to her features. On a set in Africa, she asked for a man to be removed from the film because he was missing part of his arm. Rita called him an eyesore and alienated herself from the rest of the crew. When Rita falls into the water while shooting a scene, no one wants to come to her rescue. They finally help Rita, but itâ€™s too late. Rita had already inhaled a green substance, causing her skin and body to start melting away.

Rita, Cliff, and Larry stay at the manor, each of them trying to heal. Cliff uses memories of his daughter to help him learn to walk and climb stairs in his new form. When Cliff broaches the subject of his family, the Chief has some bad news. Cliffâ€™s brain is altering his memories to help him cope with the truth of his accident. In reality, Cliff wasnâ€™t in an accident as a race car driver. He was in a car accident driving his family home. There was a truck jack-knifed in the middle of the road; there was no chance for Cliff and his family. Cliff is distraught with the final memory of his wife and child but continues to cope for years in the manor.

Fast forward to 2019. Jane has returned, but she prefers to be known as Crazy Jane. While we have yet to dive into Crazy Janeâ€™s past, we do know that she has 64 personalities, and each personality has their own power. She has been coming around the manor since the sixties. With our four â€œheroesâ€ in the manor together, the Chief takes off for a few days. It doesnâ€™t take long before Jane convinces the rest of the crew to go to town.

Rita meets a woman at a diner who actually knows her from her pictures in the fifties. Of course, the woman thinks that Rita is only emulating the late actress, but Rita canâ€™t help but listen to this woman gush over her. Larry ends up at a bar and asks for a beer. We learn that Larry has always felt like a monster, even before the accident, because he was a gay man in the sixties. Crazy Jane takes Cliff to buy a present for his daughter, and Cliff continues to mourn her death. But Jane isnâ€™t so sure that his daughter is dead. Sheâ€™s done her research, and it turns out that Clara was the only survivor of the accident, not Cliff.

Pretty soon, each of our heroes begins to fall apart. The Chief was right; they werenâ€™t ready to be away from the manor. Rita becomes a giant blob, attacking the town. Larryâ€™s stowaway causes some damage of his own, and Cliff picks up part of Main Street to stop Rita. They eventually leave the town and a trail of destruction behind. Once the Chief gets back, he realizes that Morden has found him. He tells the Doom Patrol that they need to run as far away as they can, but for once in their lives, these four are ready to fight for their home and their town.