Supergirl is dying from the kryptonite in the atmosphere. So while she fights, we get to learn more about Agent Liberty aka Ben Lockwood. So far, we have seen one side of the story, but what drove Agent Liberty to this extreme view? Why does he have so much disdain for aliens? He wasnâ€™t always this way. Showing both sides is something that Supergirl does so well, and it just goes to show that you canâ€™t judge a book by its cover.

In the past, Agent Liberty was just Ben Lockwood, a college professor trying to take care of his family. His father, Peter, owns a steel company, a company that is slowly losing its business because of alien materials. Thereâ€™s an alien metal, Nth, that is stronger than steel and being manufactured in place of steel. Peter Lockwood refuses to give in to the alien metal and starts to see his business crumble. He loses a big contract with Luthor Corp, and when Ben goes to fight for the contract, Lena tells him that his father needs to move forward. 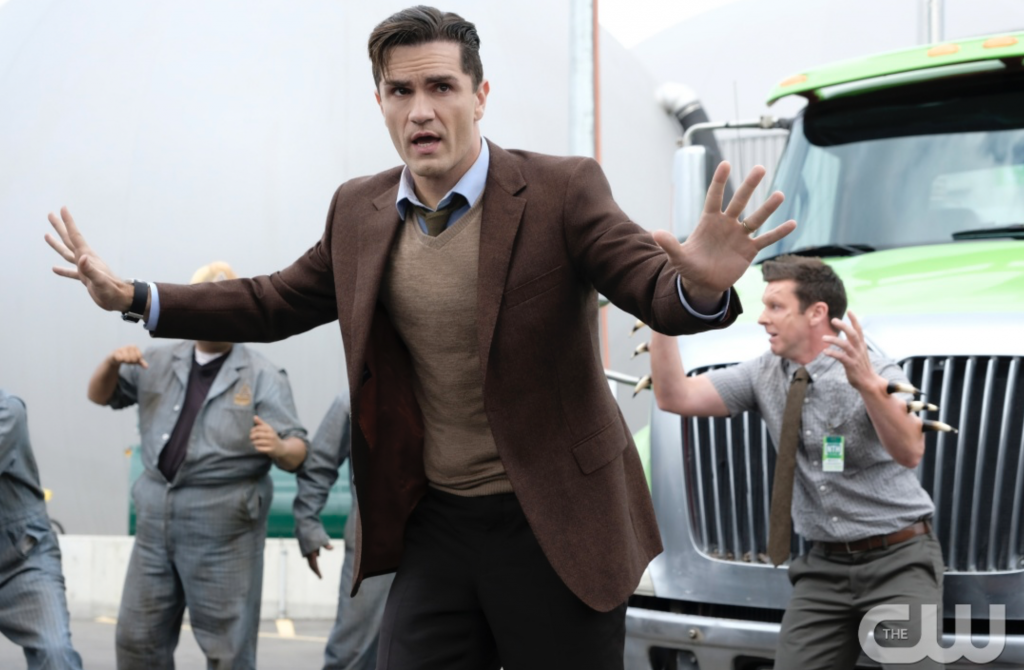 Peter and his employees start a riot over at a company producing Nth, who naturally employ a bunch of aliens. The aliens are only trying to work hard, but the steel workers see that their jobs are at jeopardy. Ben is the voice of reason and tries to protect the alien. The riot gets out of control causing the alien to release a defense mechanism in the form of a spike that pierces Ben. When the police wonâ€™t press charges, Peter is livid. The alien stabbed his son, yet heâ€™s protected because of the Alien Amnesty Act that the President passed.

Ben starts to change his tune a little bit. He poses a question to his students about progress. Many times, itâ€™s easier to focus on the good of progress without thinking about who had to be hurt for the progress to be made. People like his father and his employees at the steel factory are losing their jobs because of aliens being given amnesty.

Flash forward to the Daxamites trying to take over Earth. The Lockwoods are trying to stay put in the hope that the fighting doesnâ€™t hit too close to home. Peter wants to fight, but Ben knows that they are no match for the aliens. They decide to try and go somewhere safer, and thank goodness they do. The Daxamite fight finds the Lockwoods, and their home is destroyed. Of course, homeownerâ€™s insurance doesnâ€™t cover damages due to an alien invasion, so the Lockwoods are out of luck.

Benâ€™s classes continue to take a darker turn. He asks how humans can compete with aliens in the workforce. How can a person compete with an alien who can lift two tons of steel without using a machine? He argues that itâ€™s a question of biology and humans just canâ€™t stack up anymore. The university suspends Lockwood for his classes being too extreme. They are an alien friendly university, and heâ€™s beginning to alienate his students, for lack of a better word.

Yet another alien attack hurt Ben Lockwood and his family. His father died after an alien attack caused his factory to burn to the ground with him inside. At this point, Ben decides to take matters into his own hands. Heâ€™s done trying to be the good guy in all of this. Along with some of his dadâ€™s old employees, Ben burns down the Nth factory and even kills the alien who scarred him some time ago. These guys donâ€™t stop there. They start attacking any alien they can find. This is when these guys finally turned extreme in their actions. Now, Ben is acting as Agent Liberty, and he has plenty of people who have been hurt by the progress of giving aliens equal rights here.